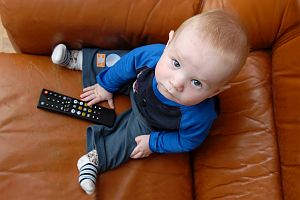 Many parents are occasionally thankful for the television—after all, it can serve as a low-cost, short-term babysitter while they cook or do housework. At the same time, however, many parents are concerned about the amount of television that their children watch—and for good reason. Statistics tell us that in America, children under six watch an average of two hours of TV a day, and children eight to 18 spend an average of four hours in front of a TV and often an additional two hours a day on computers or playing video games.

So what does all of this screen time mean for America’s children? Recent research published in JAMA Pediatrics suggests that it is results in poorer well-being and sleep and that it contributes to childhood obesity.

In the first study, part of a larger research project called IDEFICS (Identification and Prevention of Dietary- and Lifestyle-Induced Health Effects in Children and Infants), researchers examined 3,604 children aged two to six to determine if there was a relationship between their electronic media use and their sense of well-being. They assessed the children based on six standardized indicators of well-being (including emotional problems, peer problems, self-esteem, family functioning, and social interactions) and compared the results to the number of hours they spent in front of a TV, computer, or video game screen. They found that increased media use predicted much poorer senses of well-being. TV was found to be more harmful than computer use, but overall they found that there was a 1.2- to 2.0-fold increase in emotional problems and poorer family functioning for each additional hour of media use.

A second JAMA Pediatrics study involving 1,713 Spanish children found that children who watched more than 1.5 hours of television per day had shorter sleep duration and began to suffer from sleep deprivation. Their sleep duration shortened with every extra hour of television watched over the 1.5-hour baseline. And in a third study, researchers found that increased media exposure resulted in sharply increasing BMI (Body Mass Index) scores, and thus a tendency toward childhood obesity.

So how much TV is too much? Every day more research comes out indicating that exposure to electronic media can have adverse effects on children—effects that can persist into adulthood.

As a result, the American Academy of Pediatrics (AAP) recommends that children under the age of two not watch any TV, as the first two years of life are a critical time for brain development. Television and other electronic media can prevent exploring, playing, and interacting with parents and others, all of which are critical for social development. In addition, the AAP suggests that children older than two watch no more than one to two hours of electronic media per day.