Why the Washington Redskins (and their Cheerleaders) Count on Chiropractic 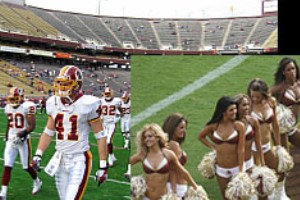 When most people first hear that the Washington Redskins football team has a Team Chiropractor, they’re probably not all that surprised. After all, we’ve all seen football games and witnessed the physical punishment that the athletes endure in every game. In fact, it would be more surprising if the quarterback who was just sacked by a 250-pound linebacker weighing 250 running at full speed WASN’T looking for a good chiropractor! However, what most football fans may not know is that the Redskins’ Team Chiropractor treats as many team cheerleaders as he does football players.

One reason for this is that the sport responsible for the most injuries to women – and the most catastrophic injuries – is not bungee jumping or skydiving but (drumroll) cheerleading. Recent studies have indicated that two-thirds of the serious sports injuries reported by women in the United States occur in connection with cheerleading. The number of cheerleading-related emergency room visits increased from around 5,000 in 1980 to over 26,000 by 2007.  The Consumer Products Safety Commission estimates that there were almost 37,000 emergency room visits for cheerleading injuries among girls aged 6 to 22 in 2011.

Some of these injuries occur as the result of falls from the top of one of the “pyramids” built by cheerleaders during their performances.  And sometimes, the “flyers” who are launched into the air by their teams don’t land properly. But a much larger number of injuries are actually suffered by the cheerleaders who form the “bases” of the pyramids, supporting the weight of multiple people on their shoulders, and to the people who end up catching the “flyers.” This can cause compression of the spine, inflammation, and other conditions that can leave athletes with reduced capabilities and in considerable pain. Just like the football players, the cheerleaders can try to ignore this chronic pain and injury and “play through it”, or they can try to treat it with drugs. But both of these approaches can create additional risks and have debilitating effects, particularly if used over an extended long period of time. In some cases, athletes may be unable to continue with their cheerleading careers.

That’s where Doctors of Chiropractic like Dr. Hirad N. Bagy come in. Having previously worked with athletes on national and professional soccer teams, he became the Team Chiropractor for the Washington Redskins in 2010. In this capacity, he and his staff have improved the health of both the players and the cheerleaders.

One reason that chiropractic care is well-suited for these types of sports-related injuries is that it doesn’t involve drugs, and is based on non-surgical, non-intrusive ways of helping the injured body to heal itself. Doctors of Chiropractic, especially those with a specialization in sports medicine, can help the athletes to heal more quickly from sprains and chronic back pain. They can also investigate the risk factors that led to the injuries, and provide advice for how to avoid them in the future. Chiropractors have broad diagnostic skills as well as the training to prescribe therapeutic, rehabilitative and preventive exercises. They can also provide nutritional and lifestyle counseling to help the athletes not only become healthy again but stay healthy.

One of the Redskins’ cheerleaders has said, “I’ve experienced multiple injuries during my career as a cheerleader…that chiropractic care has always helped me recover from.” Another says, “Without chiropractic care I would not have made it past my first year.” If chiropractic has been of this much value to professional athletes, isn’t it worth evaluating to see if it could benefit you as well?