Why Sugar is So Hard to Resist 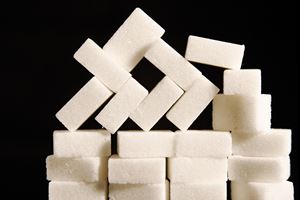 Sugar is in almost everything we eat. In the typical western diet, enough sugar has been added to food products to bring our consumption of the sweet stuff up to 22.7 teaspoons per day. It is added to processed foods to extend shelf life and enhance flavor and texture. While we know that sugar contributes to weight gain, diabetes and heart disease, it’s still hard to resist. Why? Much of the answer to that question has to do with the way humans have evolved to survive in times of scarcity.

Our primitive ancestors who had developed a taste for sugar were able to add to their body fat, which helped to keep them alive during periods of famine. This in turn allowed them to pass their sweet-loving genes on to their progeny. A study conducted by researchers at Washington University found that we are programmed from birth to crave sweet things. Human breast milk is very sweet due to the concentration of the sugar lactose, so from day one we learn to develop a sweet tooth.

One study showed how even the mere expectation of sugar can affect our cognitive ability. Scientists found that when study subjects swished sugar water around in their mouths and then spit it out, they performed better on cognitive tests than the subjects who had swished water that had been artificially sweetened. And there is a good reason why sugar is addictive. Eating sugar prompts the release of the hormone serotonin from the same area of the brain that responds to heroin and cocaine, inducing a feeling of happiness and euphoria.

It’s not always obvious where sugar is hiding in the foods we eat. While our consumption of table sugar is down, the amount added to processed foods is increasing. Many people are surprised to find how much sugar is added to such things as bologna (1.18 tsp. per 4 slices), ketchup (1.77 tsp. per 3 tbsp.) and low-fat fruit yogurt (6.16 tsp.). A couple of spoons of barbecue sauce have about as much sugar as a glazed donut! Add in the sugars typically contained in soups, sauces and breads, and it’s easy to see why obesity is becoming such an epidemic. The more we get, the more we want. A sudden rush of sugar spurs the release of insulin, which causes the infamous “sugar crash” and makes us crave even more to combat it.

However, it is possible to overcome an addiction to sugar, just as it’s possible to overcome an addiction to any other substance. Gradually use less where you can, such as in coffee or tea and in your breakfast cereal. You can also reduce or eliminate your consumption of soda (including artificially sweetened soda, which still makes you crave the sweet taste) and water down any fruit juices you may drink. After a while, your body does adjust to the taste. After a few months, if you suddenly are given coffee with sugar in it, you may find it tastes odd. Try to avoid buying store-bought desserts, and if you make your own, reduce the amount of sugar called for in the recipe. Many baked goods can use unsweetened applesauce as a substitute for 2/3 of the sugar required.

Our evolution has made it difficult to resist sugar, but it’s not impossible, and the less sugar you eat, the better it will be for your overall health.