Why Kids Don’t Feel Cold the Same Way Adults Do 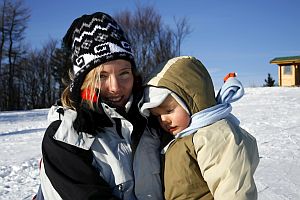 As millions of moms and dads will attest, kids frequently balk at being bundled up in coats, hats, and gloves when they go outdoors in the winter. The children claim they’re just not cold, but parents usually error on the side of caution by bundling them up and making sure they don’t get too wet or stay out too long.

The truth is that kids are at the same risk of heat loss and hypothermia as adults are, and maybe more. But it’s also true that children often really don’t feel cold, even when their parents do. Why is this?

Part of the issue involves a fundamental difference between how effective the human body is at actually regulating its own temperature and how sensitive it is to the temperature outside. We are born with the ability to generate, maintain, or get rid of heat as outside weather and circumstances dictate. In general, our bodies are quite adept at creating heat in the winter (by shivering or becoming more active) and eliminating excess heat in the summer (by sweating). But some bodies are more efficient at these processes than others—people of the same height and weight can differ dramatically in their ability to maintain a healthy body temperature. In much the same way, different people can exhibit very different levels of sensitivity when outside conditions are jeopardizing their ability to conserve or dissipate heat.

When dealing with young kids who are playing outside in freezing temperatures, one of the things to remember when they claim that they don’t feel cold is that they probably really don’t feel cold. They are naturally so active that their bodies are generating enough heat to keep them feeling warm, even if they aren’t. This can be a dangerous illusion, however, because young children’s bodies are less able to regulate their internal temperature than those of adults, and thus more prone to hypothermia as a result of their bodies’ smaller surface area, smaller amounts of subcutaneous fat, and a not-yet-fully-developed ability to shiver. So they may be telling the truth when they claim not to feel cold, but they’re probably more at risk than adults.

Another factor to keep in mind when your kids balk at being bundled up is that they don’t like being bundled up for the same reason that some babies don’t like being swaddled and wrapped in tight blankets or clothing. The “bundling” decreases their ability to move around and process sensory stimulation, and subconsciously makes them feel constricted and uncomfortable. Also, as kids grow older and become more socialized, they may not feel that wearing a coat and hat and gloves is “cool,” so they may resist being forced to wear clothing that makes them stand out and not “fit in” with how other kids are dressing.

Still, as a general rule, it’s better to make sure that your kids are dressed warmly in extreme cold to prevent issues of hypothermia and frostbite. Wearing that coat, hat, and gloves will not protect them from catching colds and the flu—that’s an “old parents’ tale” because these diseases are spread by microorganisms—but it will protect them against the physical dangers posed by extreme cold.

But here is another interesting side of the story. Scandinavian parents (from Sweden and Norway, where winter temperatures are often extreme) maintain centuries-old traditions of allowing their newborns and young infants to nap outside while sleeping in their strollers. It’s not unusual to walk past a child care center and see rows of strollers lined up outside, the babies in them wrapped in blankets and sleeping soundly. The parents—doing what their parents and grandparents before them did—feel that exposure to fresh air at any temperature is better than being cooped up inside. And the cold/flu/disease statistics in Scandinavia support this belief because the Scandinavian “outside nappers” have fewer colds than American infants do. But it’s also important to realize that these naps are always supervised by adults, the babies are wrapped warmly, and the adults bring them back inside the moment outside temperatures dip below 15 degrees Fahrenheit. Also, when the kids get bigger, their parents dress them just as warmly when they go out to play as American parents do and probably endure just as many protestations of “But Mom… I’m not cold.” as we do.

So the general consensus in the global healthcare community seems to be that you should ignore these protests from your kids when they don’t want to wear appropriate clothing in the cold, and make sure they do it anyway. The dangers of developing frostbite and hypothermia far outweigh the dangers of not appearing “cool” in front of their playmates.