Why Eating with the Seasons Makes Good Sense 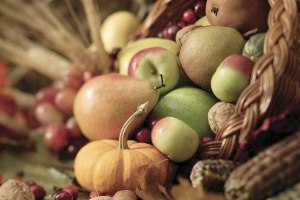 It’s true. The combination of industrial agriculture and efficient global logistics has made it possible for many American families to enjoy a wide variety of fruits and vegetables year round.

But just because they’re available doesn’t necessarily mean that they’re the best choice for you or your family. In fact, there are several really good reasons that your diet—particularly your choice of fruits and vegetables—should change with the seasons. Now that fall is here and winter is just around the corner, this is a great time to talk about seasonal eating and how you can make the most of the cold-weather months.

Nutrition. Local fruits and vegetables picked seasonally at their ultimate ripeness are usually more nutritious than produce that is grown in a hot-house environment or that is raised in other parts of the world and transported over long distances.

Taste. When it comes to fruits and vegetables, flavors and textures tends to suffer when they’re grown out-of-season or spend lots of time in transit. This encourages farmers to do things they might not ordinarily do, including adding colors, sweeteners or preservatives. The fact that out-of-season produce needs to be marketable after shipping may also encourage farmers to grow varieties that are more durable but less flavorful. The net result is often a poorer product.

Cost. Growing produce out-of-season or transporting it over long distances involves expenses that just don’t exist when fruits and vegetables are grown and marketed locally. As anyone who has ever bought fresh strawberries or tomatoes in the middle of January has noticed, these expenses translate into higher prices at the grocery store.

Environmental Sustainability. The emergence of a global marketplace for fruits and vegetables has opened up lots of possibilities for growers and consumers alike but has also come with high environmental costs. The new economics of farming and distribution have changed how land, water, energy, and chemicals are used in producing food. In some cases, they’ve also tipped the scales against centuries-old patterns of sustainable crop rotation and conservation practices. Plus, moving and storing large amounts of fresh produce requires energy and increases our collective carbon footprint.

When you consider all of these factors together, it’s clear that out-of-season produce is really a pretty big compromise. So what’s the alternative? There are many winter fruits and vegetables that will soon be their peak. Knowing about these and adding them to your diet over the coming months can provide plenty of variety and may even help you get important nutrients that you wouldn’t normally get from produce at other times of the year.

Here’s a brief rundown of some of our winter favorites.

Winter Butternut Squash. Squash has relatively few calories (only 63 calories per cup) but contains lots of vitamin A and potassium. Plus, a single cup of squash also provides half your daily requirement of vitamin C!

Kale. Kale is another winter vegetable that’s packed with important nutrients, including vitamins A, B, C and K, and minerals such as calcium, copper and magnesium. Kale is also rich in cancer-fighting phytonutrients called flavonoids (quercetin and kaempferol, among others) and has been shown in some research to lower cholesterol. Cooked kale can easily be added to mashed potatoes to make for a healthy side dish.

Leeks. Leeks too are abundant at this time of year. They are rich in vitamin K (good for bone health and vital for blood coagulation), and have a healthy amount of folate. A versatile member of the allium family (like onions and garlic), leeks can be added to soups and stews in pretty much the same way you might typically use onions. Leeks are also tasty on their own—just braise them a little liquid. If you’re willing to put just a bit more effort into preparation, creamed leeks is another tasty alternative. Just clean and slice 2-3 leeks thinly, then sauté them in a little butter, add a couple of tablespoons of water, and cover for about 10 minutes or until cooked. Mix in a tablespoon of flour and about ½ cup of sour cream and you have an excellent side dish to serve along with fish or chicken.

Apples. Apples are a great seasonal complement to the vegetables on our list. Over 2,500 varieties of this fruit are grown in the U.S., with 100 varieties grown commercially. A medium apple contains about 80 calories and is fat, sodium, and cholesterol free. If you’re interested in getting the most nutritional bang for the buck, be sure to eat the peels! Two-thirds of a typical apple’s fiber and lots of its antioxidants are concentrated in the peel. Most apples are still picked by hand in the fall and are ready for eating throughout the country all winter long!

Nuts. Many popular types of nuts (which are technically fruits containing a hard shell and a seed) are actively harvested in the fall and are available throughout much of the country year-round. Almonds, chestnuts and walnuts are a few winter favorites. It’s worth noting that while almonds and walnuts are not true nuts in the botanical sense, they are considered nuts in the culinary sense. Nuts like these are typically very high in protein and fat and naturally low in carbohydrates. They also contain several important vitamins and minerals. They are a particularly dense nutritional package and have been linked to a reduced risk of heart disease.

While it’s natural for many people to wish for the warmer weather in the depths of winter, there are definitely benefits to changing up your menu to follow the seasons!