White Meat Versus Red Meat: What Are the Nutritional Differences? 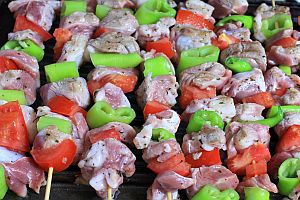 For years, health experts have advocated that we eat less red meat and substitute white meat whenever possible, since white meat is generally considered healthier. To a large extent, this is true. However, there are actually some significant nutritional differences between the two and some legitimate reasons to avoid cutting red meat out of your diet altogether.

First of all, it’s important to understand what gives each type of meat its color. All meat consists of muscle fibers. Red meat is made of muscle fiber that is referred to as “slow twitch,” meaning it is used for regular, steady activity like walking. White meat, on the other hand, is made of “fast twitch” muscle, which is used for short, sharp bursts of energy. Because it is used regularly, the muscle from red meat must carry more oxygen, so it has higher levels of myoglobin, which is the red-colored protein that carries oxygen, giving red meat its color. White meat requires less oxygen, so its myoglobin content is far lower.

Nutritionally, red meat (which generally includes beef and lamb) has a few vitamins and minerals that can be difficult to find in significant amounts elsewhere. These include vitamin B12 and heme iron. Red meat has the highest concentrations of these nutrients in their most bioavailable forms. The iron received from vegetable sources is non-heme iron, which is not as easily absorbed by the body. Red meat also contains healthy amounts of vitamin B6, creatine, zinc, riboflavin, niacin, thiamine and amino acids, in addition to being a great source of the potent antioxidant alpha lipoic acid (ALA).

Red meat as a whole is usually higher in fat and calories, however, lean red meat can be comparable in fat content to white meat. The amount of fat in lean ground beef, for example, is about the same in the equivalent amount of ground turkey. And if you buy grass-fed beef, the amount of saturated fat is lower than that in conventionally raised beef. Not only is grass-fed beef lower in saturated fat, it contains higher levels of healthy omega-3 fatty acids, vitamin A, vitamin E and beta carotene.

White meat (such as chicken and turkey) generally has fewer calories than red meat, though the difference is not as large as many people think. A 100-gram portion of beef has 136 calories on average, while a 100-gram portion of chicken contains an average of 106 calories. Chicken is a good source of polyunsaturated fatty acids (PUFAs) and contains about six times more omega-3 fatty acid than red meat. White meat also contains more easily digested amino acids than red meat, is a good source of protein and is high in potassium and calcium.

There remains some considerable controversy over whether pork should be considered red meat or white meat. Although the U.S. Department of Agriculture defines pork as a red meat, it has less myoglobin than red meat, but much more than chicken. Pork tenderloin is as lean as a skinless chicken breast, and is a good source of thiamine, vitamin B6, phosphorus and niacin.

Nutritionally, it’s hard to argue that one is definitely preferable to the other. As a practical matter, it’s probably best for most people to eat a mixture of red and white meat, since this is one way to be assured of getting the most complete range of nutrients that meat can provide. For a healthy diet, however, all meats should be eaten in moderation, along with multiple servings of vegetables and fruit!