When to Consider Going Gluten-Free 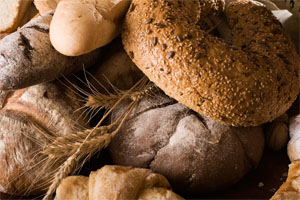 Considering all the wheat-based foods common in the Western diet, it’s not surprising that people have a difficult time staying away from gluten. It shows up in most bread, pizza, bagels, baked goods such as cookies and cake, pasta and breakfast cereal. The majority of processed foods contain at least some gluten, and it can be very difficult to create a traditional meal that doesn’t have some form of gluten in it. Even beer (due to the barley it is made from) contains gluten.

Ten years ago celiac disease was considered to be relatively rare, affecting only about 1 in 2,500 people. However, there has been a steep increase in the rates of celiac disease being diagnosed, with estimates now at around 1 in 130. Celiac disease is now one of the most common chronic diseases affecting Western countries, particularly in people of European descent. The condition is caused by an allergic reaction to gluten, a substance that is found in grains such as wheat, barley and rye. This reaction causes damage to the lining of the small intestine, keeping it from absorbing many of the nutrients in the food you eat.

Many more people are merely gluten sensitive, meaning their digestive system does not react well to gluten and causes unpleasant symptoms such as bloating, diarrhea and abdominal pain, and may also include seemingly unrelated symptoms such as headaches, rash, muscle and joint aches, depression and irritability.

Even those without a gluten or wheat allergy find that going gluten-free gives them more energy and helps them to lose weight. A great deal of the gluten in our diet comes from highly refined flour products, and cutting those from the diet alone goes a long way toward improving your health and dropping those pounds. Part of the reason for this may be that we, unlike cows, do not produce the enzyme in our saliva and gastrointestinal fluids to break down gluten properly.

If you think you may be allergic to wheat or have gluten intolerance, get a blood test before starting on a gluten-free diet.  If you start the diet before being tested, the gluten-sensitive antibodies will not be present in your bloodstream and you won’t get a definitive diagnosis.

Gluten intolerance that is untreated can progress to more serious conditions such as celiac disease, osteoporosis, infertility and cancer. It tends to run in families, so if another family member has it, you may want to get tested just to be sure.

A gluten-free diet takes a little bit of planning, but is not as difficult as it may seem. If you stick to the basic foods contained in the Mediterranean diet you can eat well and not feel you are denying yourself. This includes fish and poultry, lean meat, vegetables, beans, olive oil, nuts, fruit, and grains such as rice, corn and quinoa (which is also very high in protein). You can live well without gluten!