What We Can Learn From How Other Countries Eat 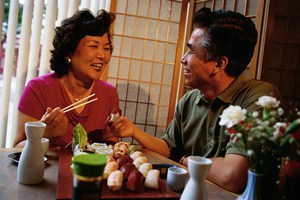 When it comes to world cuisine, there’s broad agreement that the “modern” Western diet is one of the worst for our health.  Fast food cooked in hydrogenated oils and snacks that are laden with salt and sugar make up much of the typical American’s diet.  The way many of us eat has been a major contributor to high rates of diabetes, heart disease and cancer.

So where should we be looking for tips to healthier eating?  The good news is that we can learn a lot from the traditional cuisines in other parts of the world.  Studies have shown that populations in places like Japan, India and countries around the Mediterranean Sea have far lower rates of these diseases, due in part to the health of their cuisine.

By world cuisine, we do not mean the Americanized form that has been adopted by fast food companies such as Taco Bell and Pizza Hut.  Traditional Mexican and Italian dishes can be very healthy and, unlike items on the menu at these restaurants, they do not rely heavily on cheese as a main ingredient.  Following are some of the health benefits of different cuisines from around the world.

Japanese – The Japanese have the lowest obesity rate (3%) and the highest life expectancy in the world.  And this is not due to genetics.  When the Japanese move to the West and begin to consume a Western diet, their obesity rates quickly become comparable to ours.  Their diet is based on rice, lots of different vegetables and fatty fish.  Fatty fish is rich in omega-3 fatty acid, which has been shown to have health benefits for both the cardiovascular system and the brain, warding off diseases such as dementia and Alzheimer’s.

Indian – The greatest advantage to Indian cuisine is its use of spices.  Some dishes are hot, but not all of them.  The blend of spices used in Indian dishes, such as turmeric, ginger and cumin, not only impart incredible flavor and aroma to each dish, but may also provide a variety of health benefits.  Turmeric is perhaps the king of Indian spices—it is a staple in any Indian household in much the same way that salt and pepper are in the Western world.  It has a popular reputation for protecting against cancer and may ease symptoms of arthritis.

Mediterranean – This includes cuisines from Greece, Spain, Italy and southern France.  Its main benefit is that it contains large amounts of fresh vegetables and fruits, along with healthy fats such as olive oil.  Although some would not consider duck or goose fat healthy, the French (who consume more of this fat than anyone else) have among the lowest rates of heart disease in the world.  Mediterranean cuisine also has a greater reliance on fish for protein, rather than meat and cheese, which are eaten in much smaller quantities.  This cuisine is chock full of vitamins, minerals and antioxidants that protect against cancer and heart disease.

Mexican – Real Mexican food combines basic, healthy ingredients that give the body everything it needs nutritionally (beans, rice and corn are the staples).  Many dishes allow for a slow release of carbohydrates into the system, lowering blood sugar and in some cases even reversing diabetes.  Many of the dishes also feature heart-healthy tomatoes and chili peppers.

So pick up a cookbook of traditional recipes from some of these countries and give them a try.  They’ll add some variety to your weekly menu PLUS they may help improve your health!