What is Acoustic Compression Therapy and How Can It Help Me? 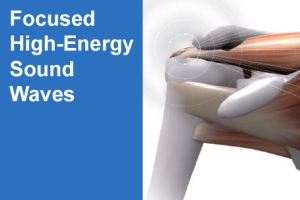 Acoustic Compression Therapy (ACT) is also sometimes referred to as Extracorporeal Shock Wave Therapy (ESWT) and refers to the use of focused ultrasound waves to treat both acute and chronic pain in the muscles, tendons and ligaments.

A strong wave of short duration that travels faster than the speed of sound is generated by a specialized machine and penetrates deep into the body’s tissues to stimulate cellular healing processes.  It works by first stimulating the nerves around the painful area to the point that their activity begins to diminish, sending fewer pain signals to the brain.  Then—over time—it operates as what is referred to as a “gate control mechanism” in which the signals being sent by the machine override the pain signals sent to the brain.

Some chiropractors use acoustic compression therapy in the course of their practice.  In addition to reducing pain, it has also been shown to reduce inflammation, a condition which in itself can trigger pain.  ACT increases circulation to the area being treated, which helps to bring more oxygen and nutrients to damaged tissues and speeds healing.

Acoustic compression therapy was first discovered in the early 1990s when similar technology was used to dissolve kidney stones.  Patients noticed that pain they had in areas unrelated to the kidneys being treated was reduced after treatment, and researchers began to explore other healing benefits of ultrasound.

Acoustic compression therapy is sometimes used as a form of Trigger Point Therapy.  This involves directing the sound waves to specific points on the body where tense muscles or muscle groups have caused nerve irritation, which may be triggering pain elsewhere in the body.  Your chiropractor can precisely control both the breadth and depth of the waves, which is often impossible to do with manual treatment, particularly in sensitive areas that have been injured or which may overreact to manual therapy.  Waves can be directed to penetrate the body’s tissues anywhere from 1 mm to 30 mm, with frequencies up to 8 Hz.

Acoustic compression therapy is a gentle form of treatment for musculoskeletal pain that will not irritate the skin or bruise tissues.  There are no significant side effects to treatment, and it is safe for most individuals (though it is not appropriate for people with bleeding disorders and pregnant women).  It is a form of therapy that is particularly useful in treating, among other things:

If you have questions about acoustic compression therapy and whether it may be helpful in your treatment, please call or visit our office.