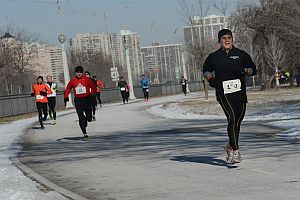 While the sense of accomplishment is certainly significant, there must be other reasons why long-distance runners endure the exhaustion, pain and injuries that frequently come with their sport. One reason may be the “runner’s high” that many of these endurance athletes feel while on the road, trail or track. This phrase refers to a sensation of euphoria that runners often experience during or after a strenuous workout.

Runners aren’t the only ones familiar with this euphoria, though. Swimmers, cyclists and rowers have also reported feeling it. Many sports that involve repetitive, rhythmic movements have been found to produce similar highs, according to researchers.

The President of the American Society for Exercise Physiologists, Dr. Jesse Pittsley, says “Psychologically, runners may experience euphoria, a feeling of being invincible, a reduced state of discomfort or pain, and even a loss in sense of time while running.” There had been some disagreement among scientists for years about what caused this phenomenon, but a German study finally pinpointed the source of runner’s high as being primarily due to a surge in endorphins. Endorphins are naturally-occurring opiates that the body produces in response to stress.

This theory had been controversial because the endorphins released during the stress response are released into the bloodstream, but researchers could not find evidence that these could travel to the brain. Finally, technological advances in neuroscience allowed researchers in Germany to confirm that there were indeed endorphins that flooded the brain in response to a strenuous run. Their findings were eventually published in the journal Cerebral Cortex.

Dr. Henning Boecker of the University of Bonn and his colleagues recruited ten distance runners and told them that the opiate receptors in their brains were being studied. There was no mention made of endorphins or the runner’s high. PET scans were performed on each subject both before and after a two-hour run, and a psychological test was given to assess their mood before and after the run.

The results of the study showed that there was a significant increase in endorphins in the brain after the run, particularly in the areas of the brain associated with mood regulation: the prefrontal and limbic regions. According to Dr. Boecker, these are the same areas that are activated “when you hear music that gives you a chill of euphoria, like Rachmaninoff’s Piano Concerto No. 3.”

Researchers are now working to see if distance runners experience greater pain tolerance. Some runners have had heart attacks and stress fractures and managed to keep running. “There are studies that showed enhanced pain tolerance in runners. You have to give higher pain stimuli before they say, ‘O.K., this hurts,’” Boecker said.

Although a runner’s high may be primarily due to chemicals in the brain, there are also clear health benefits associated with sustained aerobic exercise—not to mention the satisfaction of having completed a personal challenge—that contribute greatly to feelings of euphoria. Registered dietician Rick Hall, an advisory board member of the Arizona Governor’s Council on Health, Physical Fitness, and Sports says “There is no better feeling than raising your hands as you cross the finish line of a 26.2 mile course to the sound of hundreds of spectators cheering.