What Are “Slow Twitch” and “Fast Twitch” Muscle Fibers? 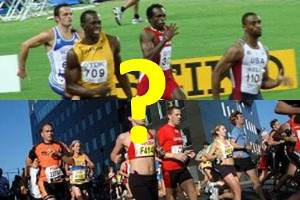 Most of us probably don’t think very much about our muscles from day to day unless we’re either training or injured. However, serious athletes—particularly body builders and runners—are probably quite familiar with some of the ideas we’re going to discuss in this article.

Slow twitch muscle fibers are also sometimes referred to as “type 1” or “red” fibers. As their name implies, they are slower in responding to nerve signals than fast twitch muscles, taking about three times longer to contract from the time they receive a signal from the nerves. This means that muscles containing a high proportion of slow twitch fibers will not be as fast or as strong as ones containing more fast twitch fibers. However, these muscles will also not fatigue as easily.

Slow twitch muscle fibers contain many mitochondria (the cell’s powerhouses) and because they work aerobically, they require a significant amount of blood and oxygen. This causes the muscle to become darker in color than fast-twitch muscle. If you consider the meat on a chicken, the legs (dark meat) are made of slow twitch fibers and the breast (white meat) is made of fast twitch fibers, which work anaerobically, thus needing less blood and being lighter in color.

Most people are born with an approximately equal proportion of fast twitch and slow twitch muscle fibers. However, elite athletes tend to have proportions that favor success in their chosen sports.  For instance, a long-distance runner or cyclist may have 80% slow twitch fibers and 20% fast twitch, while a sprinter or weight lifter may have 20% slow twitch fibers and 80% fast twitch.  Scientists are still unclear about whether and how the specific ratio of muscle fibers within any one muscle or within any one individual responds to training or patterns of use.  While some researchers believe it may be possible for one type of muscle fiber to change into another, other scientists suspect that the fibers simply become better at whatever activity is demanded of them rather than actually changing type.  Either way, it is clear that your muscles are quite capable of developing over time to meet whatever challenges you present them with provided that you keep them healthy.