Thinking About Food Labels: What the Future Might Bring 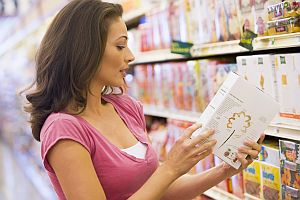 In a move applauded by nutritionists and health experts (but criticized at the same time for not going far enough), the Obama administration has proposed sweeping changes to the regulations surrounding the labeling of packaged foods. The new proposal, announced and championed by first lady Michelle Obama, aims to make it easier for consumers to figure out whether a packaged food product is healthy or unhealthy, and whether it contains large amounts of ingredients that are potentially harmful to their health.

These proposed changes have been long in coming—the current standards were first introduced over 20 years ago, in 1993. Much has changed since then and Americans have become “supersized” in more ways than one. They are eating larger portions of foods than they did in 1993, and more is known now about the effects of harmful ingredients like hydrogenated oils, trans fats, and sugar than was known then. But today’s labels still hold to the old standards, which allow manufacturers to create “serving sizes” that are completely unrealistic, and to bury useful information like the actual amount of calories, fats, and sugars you’re likely to consume in the “fine print” of the label.

As an example, the current labeling standards allow manufacturers of soda to list its calories and sugar content based on a “serving size” of eight ounces, whereas the actual bottles of soda (which are almost always consumed in one sitting) contain 20 ounces, or 2-1/2 times more. Ice cream manufacturers currently use half a cup as the “serving size” used to calculate their products’ calorie and sugar counts, whereas most Americans consume an average of two cups when they eat ice cream.

The proposed standards would change this, and instead of listing calories “per serving size,” they would list them as “amount per 2/3 cup,” or using a similar easily recognized measure. Because of national and global concerns about obesity, calorie counts would no longer appear in small print, but be highlighted in a large font. Each packaged product would list the “number of servings per package” in a more prominent location and font. Also, for the first time, a new indicator called “Added Sugars” would be included on every label, which again relates to calories, because Americans consume over 16% of their total calories from sugar.

“Calories From Fat” would no longer be listed, because more recent science tells us that it’s the type of fat that is more important for consumers to know about. Therefore, labels will list amounts of “Total Fat,” “Saturated Fat,” and “Trans Fat.” The US Food and Drug Administration (FDA) would also update their recommended “Percent Daily Values” (%DV) ratings for common nutrients to bring them into line with current science, and would finally add Vitamin D and potassium.

While all of these proposed changes are legitimate improvements, it’s (of course) impossible to please every special interest group that will be affected by new labeling regulations. Although consumers themselves will doubtlessly benefit, consumer advocates are disappointed because they were lobbying for changes like indicating added sugars, saturated fats, and trans fats in a bold, colored font to indicate that they are present in high amounts. On the other side of the argument are food manufacturers and retailers who worry about the cost of new labeling requirements and what the new information might mean for buying behavior.

The bad news is that these proposed food labeling requirements are not slated to take effect for at least two years. The good news is that the FDA has put in place a very robust process designed to allow stakeholders to “weigh in” and contribute their suggestions. You can learn more about that process at www.regulations.gov and searching for the term “food labeling”.