The Psychology of Health Care: The “Placebo Effect” in Perspective 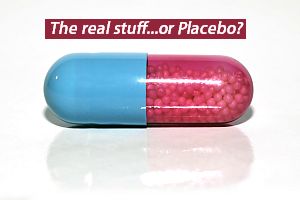 Originating in Latin, the word “placebo” is often translated into English as “I will please.” In healthcare, the word typically refers to any type of “fake” treatment—medicine, manual therapy or surgery—that does not actually alter a person’s health.

Put even more simply by Dr. David Kiefer of the Department of Family Medicine at the University of Wisconsin-Madison, “A placebo is anything that seems to be a ‘real’ medical treatment—but isn’t. It could be a pill, a shot, or some other type of ‘fake’ treatment. What all placebos have in common is that they do not contain an active substance meant to affect health.”

Why are placebos used? Dr. Kiefer explains: “Researchers use placebos during studies to help them understand what effect a new drug or some other treatment might have on a particular condition. For instance, some people in a study might be given a new drug to lower cholesterol. Others would get a placebo. None of the people in the study will know if they got the real treatment or the placebo. Researchers then compare the effects of the drug and the placebo on the people in the study. That way, they can determine the effectiveness of the new drug and check for side effects.”

What, then, is “the placebo effect”? Occasionally, a patient will actually respond to a placebo, either positively or negatively. The patient’s symptoms may improve, or the patient may have what seem to be side effects from the treatment. Collectively, these responses are known as the placebo effect.

While this description of the placebo effect is great for explaining the basic phenomenon and how it presents in experiments and clinical trials, a growing community of healthcare researchers and clinicians believes it is fundamentally incomplete. This is because it fails to recognize that every placebo treatment DOES have one active ingredient: BELIEF.

More recent studies on the placebo effect have concentrated on the connections between the mind and body. One very pervasive theory is that a patient’s beliefs—in particular, their expectations—control the placebo effect. In short, if a patient believes that a treatment will do something, then their body’s own chemistry may, in some cases, produce results comparable to what that they believe the treatment will achieve.

In one study, for example, volunteers were given a placebo and were told it was a stimulant. After taking the pill, the volunteers’ pulse rate sped up, their blood pressure increased, and their reaction speeds improved. When people were given the same pill and told it was to help them get to sleep, they experienced the opposite effects.

Continues Dr. Kiefer, “Experts also say that there is a relationship between how strongly a person expects to have results and whether or not results occur. The stronger the feeling, the more likely it is that a person will experience positive effects. There may be a profound effect due to the interaction between a patient and health care provider.”

Dr. Ted Kaptchuk is a Professor of Medicine at Harvard Medical School and Director of the Harvard-wide Program in Placebo Studies and the Therapeutic Encounter (PiPS) at Beth Israel Deaconess Medical Center in Boston, Massachusetts. He and a research team recently conducted a study that used migraines and a migraine drug to isolate the placebo effect in a group of 66 patients experiencing successive attacks. “There was no difference between the pharmacology of the drug in reducing pain and the placebo dressed up with a nice word… Basically we show that words can actually double the effect of a drug. That’s pretty impressive.”

This is a very, very important idea. If true, it means that the effectiveness of EVERY TYPE OF TREATMENT depends—at least in part—on the patient’s own attitudes and expectations and how those expectations and attitudes are created and managed by their doctor. This may be especially relevant for ailments that involve the subjective experience of symptoms, including certain types of pain.

What’s particularly exciting about this type of research is that the mind-body connection it explores is at the center of many therapies used by practitioners of complementary and alternative medicine (CAM). In this area, today’s medical science may be catching up with traditional medical practice. As we study these CAM therapies using modern techniques, they tend to gain credibility and the healthcare community as a whole benefits from a broader understanding of how the body actually works.