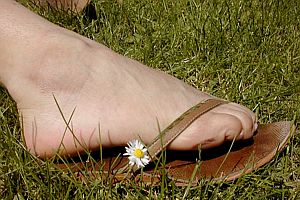 The term “supination” refers to a position of the arm or foot that is different than the normal, at-rest position. This is the opposite of “pronation”. In most cases, supination refers to the foot because of the problems associated with foot supination.

Another way to describe supination is that the fifth metatarsal or lateral side of the foot provides the primary support for the body’s weight. If you’ve ever seen someone who is bow-legged, they will likely be walking on the outside edges of their feet. This is supination. It is frequently accompanied by a high foot arch, creating a veritable cave under the foot.

Normally, the foot is neither overly pronated nor overly supinated. With extreme cases of either, the stability of the entire body is put in jeopardy. Over-pronation occurs about nine times more often than over-supination. Both, however, can lead to serious musculoskeletal problems.

The arch of the foot provides a remarkable combination of strength and flexibility in helping to cushion the impact of the foot-strike when walking or running. The tendons and ligaments which hold the foot together are stretched as the arch flexes, acting as a shock absorber. With supination, the foot does not benefit from the foot’s arch. The shock of impact is transmitted directly to solid bone right up the leg, abnormally impacting the knee joint. This can also adversely affect the muscles, tendons and ligaments in the foot, leg, hip and back.

A slight amount of supination is normal at the start of a person’s walking or running gait. As the ankle flexes and the foot pushes off the ground, it rotates toward a slight pronation. Over-supination creates problems. This rolling outward of the foot can place excessive pressure on the ankle and could lead to a sprain or even a rupture of the ligament.

Other problems caused by over-supination can include the following:

Maintaining proper alignment throughout the body is important for overall health. Your chiropractor can help align not only your spine but your extremities as well. Ask your chiropractor about extremity adjustments and the protocol for a pronated or supinated foot.