Starve a Cold and Feed a Fever? 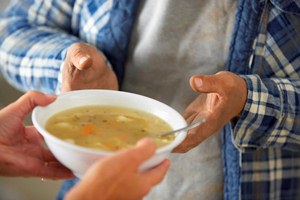 Most of us have probably heard the old adage “starve a cold and feed a fever” (with some believing that it’s the other way around…), but does this saying hold up in the face of scientific research?  The short answer is “no.”  The best thing you can do is probably to feed both.

We would all like to believe there’s some easy way of reducing the length or severity of our suffering as we sniffle and cough our way through the aches, pains and lack of energy brought on by a cold or flu.  However, there are not really very many things that can be done about it, apart from getting plenty of rest and drinking lots of fluids.  But what role does eating—or not eating—actually play?

There was one study in 2002 performed by Dutch researchers and published in the journal Clinical and Diagnostic Laboratory Immunology that tested the validity of the concept.  They found that fasting was better at fighting the infections that caused fevers, and eating a meal better fought off viruses associated with colds.  However, it used a very small sample of subjects and its results were not reproducible in further studies.

Most people do not feel particularly hungry when they are sick with a cold or fever anyway, as the body naturally regulates the amount of food we eat when ill.  Certainly, eating a large heavy meal will use some reserves of energy that would be better used in fighting off pathogens.  However, keeping a steady stream of nutrients flowing through your system is a good idea and provides your body with the tools it needs to kill invading viruses.

Concentrate on getting nutrient- and antioxidant-rich foods in your diet as best you can, along with plenty of sugar-free fluids.  Many people drink a lot of juice, thinking it will provide them with vitamin C, but you would be better off eating strawberries or red peppers (both of which are high in vitamin C) or taking a supplement, as juice comes with a lot of sugar.  Sugar has been proven to suppress the immune system, which is exactly the opposite of what you need when you are ill.

Warm broths are also excellent when you are sick.  The prescription of chicken soup for upper respiratory symptoms has been around since the time of the ancient Greeks, and the practice was adopted by the Jewish physician and philosopher Maimonides.  There’s a reason your mother brought you chicken soup when you had a cold or flu.  Far from being an old wives’ tale, a study performed by Dr. Stephen Rennard from the University of Nebraska Medical Center showed that chicken soup inhibited the movement of neutrophils (a type of white blood cell) in the body so they could not travel to the upper respiratory area and induce inflammation.

Chicken soup is only effective as a treatment if it is prepared using both chicken and a variety of vegetables such as onions, celery, carrots, parsnips, sweet potatoes, turnips and parsley (and then filtered).  Whatever its activity against pathogens, at the very least it provides your body with plenty of nutrients and warm liquids that will help get you feeling well again soon.