Spotlight on Drug Interactions: What You should Know 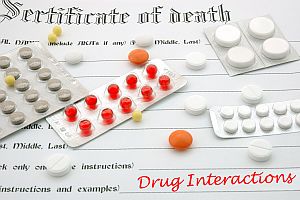 Medications—prescription, over-the-counter, and herbal/nutritional­—are used every day by millions of Americans to treat illnesses and to help them stay healthy. There is no question that these medications have improved our lives: Just try to imagine a world without antibiotics or without the tens of thousands of other medications that we rely on to save lives and prevent serious diseases.

At the same time, because Americans take so many medications—often simultaneously—a growing health risk has emerged in the form of drug interactions. Drug interactions are the negative side effects that can occur when we combine medications with other medications or with certain types of food or drinks that we also consume. For example, you have probably received a prescription at some point and been told by your doctor or pharmacist not to drink alcohol while taking it, because that could cause negative drug interactions. But did you know that a simple thing like grapefruit juice could also cause negative interactions? In a review published in the Canadian Medical Association Journal, researchers identified 85 different medications that interact negatively with grapefruit or grapefruit juice. Of these medications, 43 pose a risk of serious side effects, including severe symptoms like respiratory failure, kidney failure, intestinal bleeding, and even sudden death.

The growing possibility of serious—and even deadly—drug interactions places an increasing burden on physicians, pharmacists, and the public to become more aware of this problem and to take steps to prevent it. The risks of negative drug-to-drug and drug-to-food reactions are numerous and can be affected by factors such as the age and gender of the patient as well as his or her medical history, general health, body composition, and the number of medications used.

It is virtually impossible for a layman to be aware of all of the possible negative drug-to-drug and drug-to-food interactions, so the most important piece of advice to take to heart is to never leave your doctor’s office after having been prescribed a drug without asking when to take it, how much of it to take, and whether there is anything it should not be taken with.

This should be considered a basic health safety procedure, and you should practice it with scrupulousness. For example, if you are meeting with your doctor and are about to be prescribed medication, be sure to tell him or her if you are using any other medications, nutritional supplements or herbal products. Your doctor needs this information to safely prescribe the medications you need. Even “small” things that you think may not matter might actually matter a great deal! Remember our grapefruit example? If you normally eat a lot of grapefruit or drink a lot of grapefruit juice, you should mention this. Why? Because one of the chemical compounds found in grapefruit increases the absorption of many drugs. This can enhance their effects and make them more powerful, sometimes dangerously so.

This does not mean, of course, that you need to provide every detail of your diet and lifestyle to your doctor—focus on the aspects that you think may be relevant. You can learn a lot about possible negative drug interactions by reading publications such as this document on common drug interactions, “Drug Interactions: What You Should Know,” available from the U.S. Food and Drug Administration.

Also, if you want to be proactive, you can consult the online Interactive Drug Checker at WebMD, which allows you to enter the name of a prescription, over-the-counter, or herbal medication and then enter additional medications and find possible negative interactions between them.

Another all-important piece of advice is to always read the label that comes with the medication or supplement. It will contain information about the medication as well as other drugs, supplements, and foods that should not be taken at the same time.