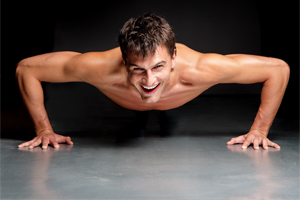 Shoulder instability occurs when the shoulder joint is too loose and the ‘ball’ of the humerus (upper arm) can move around too much in the ‘socket’ of the scapula. In a healthy shoulder joint, the four tendons that make up the rotator cuff hold the scapula and humerus in place, together with three sets of ligaments. These usually prevent too much movement at the shoulder; however, damage to these structures can lead to looseness and instability.

Instability of the shoulder tends to occur most often in three types of patients: those who have previously dislocated their shoulder, sports people who play sports with an ‘overhead’ action and those who are double-jointed.

Athletes who repeatedly make overhead movements as part of their sport may stretch the shoulder ligaments to the point of instability. Those at risk include tennis players, swimmers and baseball pitchers. Even if dislocation does not occur, the very real fear of the joint moving out of place during sporting events will often impair both performance and enjoyment.

Double-jointedness, or the ability to move joints further than normally possible, is characterized by joints that are already lax. People with this condition are therefore naturally more prone to suffer from shoulder instability than other members of the population.

Non-surgical treatments for shoulder instability include pain medication (often with the use of NSAIDs like ibuprofen to reduce inflammation, with cortisone injections being advised in severe cases), hot and cold compresses, gentle chiropractic manipulation and avoidance of certain movements that are known to exacerbate the condition. Once the pain and inflammation have been brought under control, exercises to build up the shoulder muscles may be helpful.

Most patients are able to regain function in their shoulder after six to eight weeks of treatment. However, if non-surgical treatment remains ineffective after two or three months, surgery may have to be considered.

Younger (under 35 years old) patients usually tear their shoulder labrum (a so-called ‘Bankart tear’), which can be repaired by reconnecting the affected ligaments to their original position. Older patients, however, are more likely to experience a rotator cuff injury.  Rotator cuff surgery that repairs the damaged ligaments is often the best option for the 50% of such injuries that do not respond well to non-invasive treatment.

In all cases, ongoing consultation with your chiropractor is recommended to determine which treatment option is best for you.