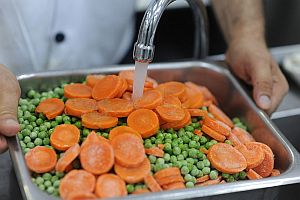 With all of the recent concern over food-borne bacteria such as E. coli, many people are wondering what they can do to protect themselves and their families. In particular, they’re wondering whether washing their foods before preparing and eating them really does any good. Interestingly, the answer to this seemingly simple question is both “Yes” and “No” depending on the foods.

As you may have seen in news reports recently, Drexel University and the U.S. Department of Agriculture (USDA) are strongly advising people not to wash chicken and other meats before cooking them. There are several reasons for this. Firstly, although raw poultry, beef, pork, and lamb do occasionally have harmful bacteria clinging to their surfaces when you buy them, most of these bacteria are so firmly attached to the meats in question that you wouldn’t be able to fully remove them no matter how long and how carefully you washed them.

Secondly, all of these bacteria—those harmful and those less so—are killed by the cooking process so long as you cook the meats to the proper temperatures. Thus, your best defense against food-borne bacteria in meat products is to invest in a good kitchen thermometer and use it every time you cook. Cook all raw beef and veal steaks, roasts, and chops to an internal temperature of 145 degrees Fahrenheit (63 degrees Celsius) as measured by the thermometer before removing the meat from the heat source. Cook chicken, turkey, other poultry products, and ground meat products of any kind to an internal temperature of 165 degrees Fahrenheit (74 degrees Celsius).

Thirdly and most importantly, the USDA does not recommend washing your meats before preparing them due to the danger of cross-contamination. While the washing does not remove all of the harmful bacteria from the foods, it does transfer a great deal of bacteria to your sink, counter tops, cutting boards, the utensils used to cut the meats as well as to your hands. This is a danger when handling any type of food, so the USDA recommends that you wash your hands with soap and water for 20 seconds both before and after handling any food.

When it comes to fresh fruit and vegetable products, however, the USDA’s advice is exactly the opposite—you should always wash them before preparing and eating them. One of the reasons for this is that almost all fresh fruits and vegetables are covered with dirt and possibly with pesticides from the farms on which they were grown. And, as we have seen with the recent E. coli outbreaks, they can be covered with harmful bacteria as well. While it’s true that some of these bacteria would normally be killed during the cooking process, this won’t apply if you’re preparing salads or other raw dishes. That’s why washing the foods first is a good idea. Always do this with any fresh fruit and vegetables that are not labelled “Ready- to-Eat” or “Pre-Washed”.

As for how to wash them, the issue of cross-contamination is still a problem. Therefore, the USDA recommends that you not rinse the fruits and vegetables under a running tap in your sink (thus transferring the bacteria to the sink), but in a bowl of fresh water. You can discard the water afterwards and then clean the sink with a mild disinfectant just in case. Of course, you should also wash your hands again. Peeling the outer skins off of fruit and vegetables can also help to remove any bacteria that may be present.