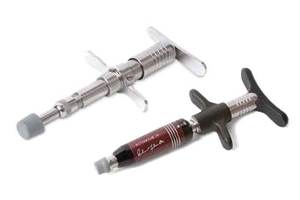 If you’ve ever visited a chiropractor’s office, the chances are good that you’ve seen a device that looks like the ones pictured here.  And you may have been curious about what it is and why it’s used.

The Activator Adjusting Instrument (AAI) is a hand-held tool that is used to provide low impact, high-speed chiropractic adjustment to specific areas of the body.  As an alternative to hands-on manipulation, many chiropractors believe it is particularly useful in treating patients who are anxious about receiving manual treatment, including young children and the elderly.

The use of instruments in treating musculoskeletal conditions has a very long history (it’s been prevalent for more than a century).  However, some patients might wonder whether the AAI treatment is as effective as the hands-on alternatives.  What does the research say about the effectiveness of AAI treatment as a chiropractic intervention?  Since over half of all American chiropractors report using AAI treatment in their clinical practice, we thought we’d share some of the clinical evidence with you.

A team of researchers led by Tiffany Huggins conducted an analysis of previously published studies that examined chiropractic treatment using the AAI.  Their approach included a search for papers in which the AAI was used either alone or as part of the Activator Methods Chiropractic Technique (AMCT).  The AMCT is a system of diagnosis and treatment involving the comparison of bilateral leg lengths as a measure of postural complications.  Only eight studies were ultimately considered relevant and robust enough to include in the team’s review.  This was because many prior papers on the subject of the AAI addressed either its history or its diagnostic use, neither of which was related to the researchers’ investigation.

The team’s systematic review of the eight qualifying clinical studies was unequivocal in demonstrating that AAI treatment provided meaningful and statistically significant benefits to patients for a range of musculoskeletal disorders.  In studies that compared AAI interventions with manual manipulation, hands-on treatment was found to be no more effective than that observed with AAI use.

Use of AAI treatment is thought to be particularly effective in working with patients who have fragile bones (those with osteoporosis, for example) as well as patients who are anxious about joint cavitation (“cracking”) or being touched by others.  While it’s worth mentioning that no particular study has demonstrated that using the AAI is safer than manual manipulation, the reassurance it provides to certain types of patients may lead to greater clinical effectiveness when used appropriately.

The team’s systemic review found that AAI treatment is just as effective as more traditional hands-on approaches, and the researchers concluded that there is no reason why it should not be included as part of mainstream chiropractic care.  However, the study’s authors were careful to point out the limitations of their own work, including the small number of clinical reports available for analysis.  More investigation into the use of AAI treatment for different conditions would be very helpful to build a greater evidence base for effective clinical use of this instrument.