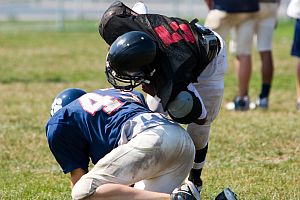 There is no question that football is a full-contact sport that has the potential to cause a variety of injuries, some of which can be very serious.  There is also no question that tackles are the most dangerous part of the game. Concussions and other head injuries, plus damage to the neck and spine can not only put a player out of commission, they may also lead to permanent injury or death.

Today’s professional football players are large, strong and fast. The traditional wraparound tackle places the head into harm’s way and increases the risk of injury. Football officials are promoting a method to change all this. To prevent or lessen this danger, the objective is to take the head out of play as much as possible. This is called the “heads-up” method of tackle. The experts say that you should not lead with your head down, as this can be dangerous not only for the tackler but also for the ball carrier.

Why has this become such an issue? The Washington Post reported in early 2013 that professional football injuries have risen between 2000 and 2011 from 2,640 to 4,473 injuries. In that same period, the average number of weeks a player spends on the NFL injury report has grown from 3.24 to 4.12 weeks. So, there are not only more injuries across the board, but longer lasting injuries as well.

The method recommended by professional football officials, including the NFL commissioner, and even the CDC, involves a specific form of stance and approach. With the head up and back, the chest forward and the arms extended slightly with elbows pointed down and knuckles pointed up, the tackler uses their leg muscles and hips to lunge upward, driving the chest and shoulders into the ball carrier. The tackler ends by throwing what looks like double uppercuts.

But not everyone agrees that the technique promoted by football officials is practical or that it’s likely to reduce the game’s inherent risks in any meaningful way. Matt Chaney, an analyst of football health issues, including catastrophic injuries, wrote a scathing critique of the method in a 2012 issue of Slate magazine. Chaney wrote, “As a former head-basher in NCAA football, I can say that this is a technique that I’ve seen precisely no one, ever, use on the field.” So, even though coaches may train and drill the technique, according to Matt Chaney, it isn’t used in the real world. Chaney explains, “To ask the body, while traveling at [football] speed, to crane the neck up and back, in defiance of physics, is a fool’s errand.”

At the same time, however, it is clear that some approaches to tackling—and being tackled—are safer than others. And the incentives to reduce serious injuries are beginning to grow for everyone in the broader football community, from team owners and coaches to the players themselves. Rule changes, improvements in protective gear and—yes—advances in tackling techniques all have a role to play. This is especially true in youth football programs.

Professional football players take their chances. After all, it’s part of their chosen career. However, juvenile players require more care and guidance. So what can be done to protect youth players? While some believe that better education and training (as well as better equipment) is the answer, others think that the nature of tackle football itself is the problem. Unlike baseball, which is sometimes described as men playing a boys’ game, tackle football is in some respects a man’s game being played by boys. This is the perspective taken by Matt Chaney. “If the NFL is truly serious about protecting kids,” wrote Chaney, “instead of building up the sport’s talent pool, then the league and the players’ union should start listening to the growing medical call to end tackle football for pre-adolescents.”