Preventing Back and Neck Injuries in Young Football Players 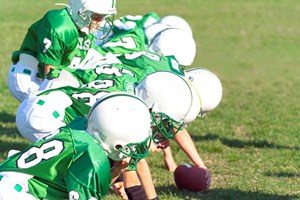 When you’re young it’s easy to believe you’re invincible and that accidents and injuries are things that only happen to other people.  However, when kids play a contact sport such as football, there’s a very real risk of injuries that can affect them for the rest of their lives.

Of the more than one 1 million players who participated in 2011, two high school football players died as a result of football-related accidents.  However, non-fatal back and neck injuries are far more common.  Chiropractors suggest that many of these injuries can be avoided by educating football players about how their spine works and which positions to avoid during play, especially when tackling.  Many professional teams even employ their own chiropractors to help prevent and treat injuries.

The majority of serious football injuries are caused by compression of the cervical spine (neck).  When players collide during a tackle, the amount of force felt by both players is considerable.  However, if a player drops his head before impact, the collision is felt much more keenly, as the flexing of the cervical spine reduces the natural properties of shock absorption in this part of the upper back.  Keeping the head up can dramatically reduce the number and severity of neck injuries in young players.  Avoiding direct head (helmet) contact with an opponent is also an important part of staying safe and minimizing impact on the neck and upper back.

In addition to good tackling mechanics, warming up and cooling down before and after a game is as important in football as it is in other sports.  Muscles that have not been warmed up and stretched before a game are far more likely to strain or tear on exertion.  Similarly, cooling down exercises prevent sharp contractions of over-exerted muscles.  All good coaches will teach this to their players from a young age.

Conditioning muscles through gym workouts is an important part of most sports.  However, there may be a tendency in football for trainers and players to pay special attention to areas of the body that improve performance (such as the legs and upper body) while neglecting the more vulnerable muscles of the neck region.  Neck strengthening is an excellent way of reducing the chance of a serious cervical injury, as the muscles will be able to absorb more of the impact of a collision.  This is even more true if the player’s head is kept up, as noted above.

Several chiropractic organizations have taken a lead in educating football teams and players at the high school level and beyond to reduce the risk of head, neck and back injuries.  Some chiropractors provide free advice to teams and even produce posters and educational messages to post in locker rooms as a natural extension of their chiropractic care in the community.  A good ongoing relationship between local chiropractors and high school football teams provides a firm basis for educating young athletes about the importance of spinal health, proper preparation and good playing mechanics.