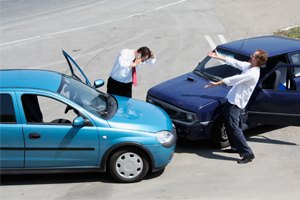 Most people in pico rivera or else where will be involved in an auto accident at some point in their life, so it’s a good idea to know what to do in the first 24 hours should one occur. Following are a few tips to ensure that you receive the best care while reducing your liability.

First, move yourself and anyone else involved in the accident off the roadway to a safe place and call 911 if anyone is seriously injured. If the accident was minor you can move the cars off the roadway yourself. If not, leave them where they are and a tow truck will remove them once the police have arrived.

Look for witnesses at the site and get their information if possible (such as name, address, phone, e-mail). Once you have left the scene you will likely not have another chance to speak with witnesses.

Examine the area for skid marks, glass, etc. to document what has happened and take as many photos as possible of damage to your vehicle, the location of the accident, the people involved, or any other evidence that exists in the surroundings.

Get medical help as soon as possible, even if you don’t think you are hurt, as you could have serious internal injuries that you are not immediately aware of. Most injuries from minor auto accidents are due to whiplash or other soft tissue injuries, which may not show up until several hours after the accident. If you are asked by anyone (such as the other party, your insurance adjuster or the police) at the accident site if you are injured, you should say you don’t know, but that you will see a specialist – such as us – for a complete evaluation. People often are unaware that they are injured, and it may be difficult to claim medical damages later if you are recorded as saying you are unhurt.

Though the police do not have to be called for minor accidents (such as a door ding or scratched bumper), if you plan to involve the police they must be contacted within 24 hours of the accident occurring. If either you or any other people involved in the accident have subsequent medical or damage claims, you want to be sure the accident has been legally recorded by the police. Speak to the officer at the scene, provide relevant information, and remember to stay calm. Get the name of the officer, their badge number, the city and agency they represent (state or local police, for instance), and the police report number. Ask the officer for a copy of the police report (or where you can pick it up).

Report the accident to your insurance company and file your claim. If you have been injured, you should also call an attorney, as the insurance adjuster is not likely to represent you. Keeping their costs down is their main goal, whereas your attorney is paid to represent your interests.