One Fish, Two Fish, Good Fish, Bad Fish? Making the Right Seafood Choices for You and Your Family 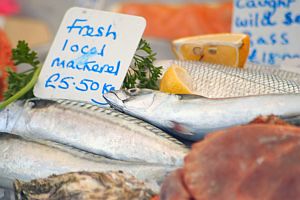 There’s no question about it—food has become complicated. Issues ranging from genetically modified organisms, potentially toxic herbicides and pesticides and long-term soil depletion to growth hormones, antibiotics and the living conditions of farm animals make it more important than ever (and more difficult) to shop thoughtfully for groceries. Pay for organic? Eat seasonal? Buy local? Go vegetarian or vegan? It’s a lot to consider. But all this complexity doesn’t end with the choices we make about domesticated plants and animals. And it doesn’t stop at the water’s edge either.

Over the past decade, we’ve seen more and more articles in the media about the many health benefits that come with eating fish on a regular basis. At the same time, we’ve seen other articles (sometimes in the same newspapers and magazines) about the growing health threat of contaminants like mercury and other heavy metals that are finding their way into many important fish populations. Then there global concerns about widespread over-fishing and ecologically dangerous fishing practices… How do we separate fact from fiction? Once we do that, how do we make decisions that are consistent with our values and priorities?

All of these issues are real. There are many nutritional benefits to eating fish, and there are types of fish that are high in contaminants, and there are varieties of fish you might want to avoid for ecological reasons. In this short article we can’t possibly do justice to the whole topic, but we can give you a few tips about which fish varieties are both good and bad for you, which may taste good but are bad for you, and which are sustainable and thus better to include in “green” diet plans.

According to lists compiled by Seafood Watch, an environmental program run by the Monterey Bay Aquarium, the following fish (1) are high in healthy omega-3 fats, (2) contain low levels of contaminants, and (3) come from sustainable fisheries or fishing grounds:

The fish on this list, however, should probably be on your “avoid” list, because they have been shown to contain risky levels of contaminants: