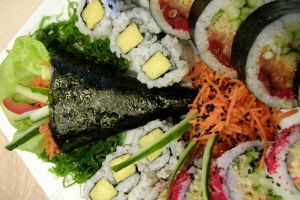 Omega-3 fatty acids are polyunsaturated fatty acids that are deemed “essential” because they fall into a category of nutrients that the body needs, but cannot synthesize in sufficient quantities by itself. They must be consumed in our foods or in the form of supplements so the body receives enough omega-3 to meet its needs.

Recent research is indicating that, in addition to the well-known benefits of omega-3 fatty acids for the cardiovascular system and other organs, they’re pretty essential in keeping our brains healthy too. This suggests that they may also play a significant role in our cognitive development and mental health. One of the reasons for this may be the presence in omega-3 fatty acids of docosahexaenoic acid, or DHA. DHA has been identified as an important nutrient responsible for proper brain development and optimal brain function.

In a more recent study published in the Journal of Neuroscience in February 2014, researchers found that DHA may even be a major factor in how our brains are created in the first place. In the study, monkeys fed a lifelong diet high in omega-3 fatty acids and DHA were found to have brains with highly connected and well-organized neural networks, similar to those of humans. At the same time, monkeys raised on a lifelong diet low in omega-3/DHA had much more limited brain networking.

A study published in the journal Neurology in January 2014 also found links between omega-3 fatty acids and brain volumes in humans. In the study, more than 1000 post-menopausal women had blood samples drawn and MRI scans taken at the start of the study, and then 8 years later. The data indicated that overall brain size was smaller in women in the lowest quartile of omega-3 levels, compared to women in the highest quartile. It also indicated that the hippocampus—the area of the brain in charge of cognitive function—was significantly smaller in the brains of the women in the lowest omega-3 level quartile. As one of the researchers phrased it, “…when we look at the whole picture, omega-3 fatty acids are a major component of brain tissue and they are metabolized to anti-inflammatory compounds that could reduce brain cell death. We can certainly make a good story to support the idea that omega-3 fatty acids are good for the brain.”

So if you’re concerned about keeping your brain as healthy as possible and preventing its decline as you age, adding more omega-3 fatty acids to your diet may be part of the answer!