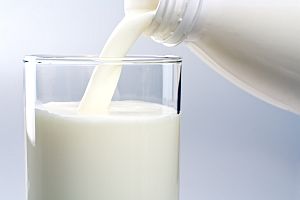 America seems to be increasingly “over” its infatuation with milk. Per capita milk consumption in the United States has fallen almost 30% since 1975, even as consumption of cheese, yogurt, and other dairy products has risen. This trend is so disturbing to the milk industry that they have recently retired their long-standing “Got Milk?” ad campaign.

That’s right—no more milk mustaches on the faces of celebrities in print ads or commercials, reminding you to always have enough milk on hand to go with your cakes, cookies, and other treats. That image—associating milk with sugary foods—is perceived as negative as more Americans move toward healthier diets that avoid sugary foods. Instead, the milk industry is rolling out a new “Milk Life” ad campaign, which emphasizes milk’s nutritional benefits, especially its protein content. One of the new ads, for example, shows a young woman playing a guitar and saying, “What 8 grams of protein looks like when you unleash your inner rock star,” referring to the amount of protein in an 8-ounce glass of milk.

The new campaign targets children and young adults for good reason—they are the segment of the population whose taste for milk has decreased the most in recent decades. The national milk industry also encourages families to drink milk at breakfast, since this first meal of the day accounts for almost 50% of current milk consumption. Their campaign promotes the idea that milk in the mornings gives you the protein you need to get through the day. Sal Taibi, president of the advertising firm behind the new campaign, sums it up thusly: “In the past, we have been saying that everyone needs to drink milk. Now, we are showing what milk does for you.”

While the American public has become more aware of milk’s potential nutritional drawbacks as well as milk alternatives, milk still has its merits. Milk, after all, is still one of nature’s remarkably well-balanced foods. It provides your body with calcium, vitamins K and D, boron, and magnesium. It also has been clinically shown to help prevent migraine headaches, osteoporosis, colon cancer, and hypertension. It provides as much restorative hydration as sports drinks do, it works as an antacid in the stomach, and when heated, it can help to induce sleep and act as a muscle relaxant. When consumed regularly, milk may even help people avoid fat gain.

The main issues that keep many people from drinking more milk are that they believe milk is full of fat and that they’re just not that fond of the taste. The first problem is easily solved by drinking low-fat or non-fat milk, which still contains all the protein and other nutrients. As for the second problem, if you or your kids really don’t like the taste, try adding milk to a fruit smoothie or adding small amounts of strawberry juice, banana extract, vanilla extract, or chocolate syrup to your milk.

If you’d like to add more milk to your diet—or to your kids’ diet—there are a few simple ways to do so. First, try to analyze how much milk you actually consume; you might be surprised at how seldom you actually drink a glass of milk. Next, balance your desire to drink more milk against your overall calorie consumption per day. Milk contains about 110 calories per serving, so if you want to follow dietary recommendations and drink three glasses per day, your diet has to be able to handle an additional 330 calories.

Of course, there are many, many foods other than milk that can contribute to a healthy, balanced diet. In fact, eating a wide variety of whole foods is the single best way to ensure your body is receiving the nutrients it needs. Fruits, vegetables (especially leafy greens), whole grains, and lean protein are particularly important.

As in most things, variety and moderation are the keys to a healthful diet. With this in mind, milk can still play an important role—with or without the mustache!