Milk and Bone Health: Another Reason It’s Not Just for Kids! 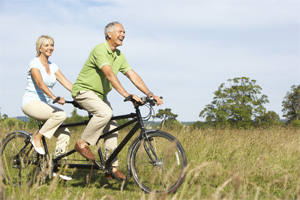 Got milk? If so, and you’re female, drinking more of it may help to prevent arthritis of the knee.

These are the findings of a 4-year study funded by the U.S. National Heart, Lung, and Blood Institute, and published in April in Arthritis Care & Research. The study, led by Dr. Bing Lu of Brigham and Women’s Hospital in Boston, involved 1,260 women and 900 men.

The patients involved in the study had all been previously diagnosed with knee arthritis. Their conditions were assessed before the study began, and at 12-, 24-, 36-, and 48-month intervals. X-rays were taken at each checkpoint to measure the width of the joint space, which is an indication of cartilage loss, and thus a measure of how fast the disease is progressing.

The results show a significant association between increased milk consumption and knee health. Interestingly, the association was found primarily in women – men did not benefit as much. The study results also indicated that the benefits came from skimmed or low-fat milk, not from milk products such as cheese or yogurt. Cheese actually increased the rate of knee arthritis progression, possibly because of its higher fat content.

Osteoarthritis (OA) affects nearly 27 million Americans over age 25, and arthritis of the knee is more common and more severe in women, so the results are considered important. The causes of osteoarthritis may be related to risk factors such as obesity, joint injury, and repetitive stress injury from some sports, but the risk factors associated with the progression of osteoarthritis have never been fully understood. As Dr. Lu explains, “Milk consumption plays an important role in bone health. Our study is the largest to investigate the impact of dairy intake in the progression of knee OA. The findings indicate that women who frequently drink milk may reduce the progression of OA.”

OA occurs when the natural cushioning provided between joints by cartilage begins to degenerate. Small injuries to the affected joints can then trigger an immune reaction that causes inflammation and results in even faster degeneration leading to pain, swelling, and even deformity of the joints. Milk has long been recognized as an excellent source of vitamins and minerals, and thus essential for bone health, but this study is the first to establish a clear link between increased milk intake and slowing the progression of OA.

The study authors cautioned that their findings do not establish a clear cause-and-effect link between increased milk consumption and slowed OA progression, so it is too early to advise women with OA to drink more milk to prevent their condition from getting worse. But the study results inspire hope that such a link will be proved in follow-up clinical trials, and that one of the keys to slowing the debilitating effects of knee arthritis in women may be as simple as drinking more skimmed and low-fat milk.