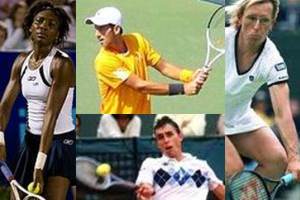 There are about 800 professional tennis players in the U.S. who regularly play in competitions sanctioned by the US Tennis Association (USTA). Dr. David E. Stude, a chiropractor and professor at Northwestern Health Sciences University in Minnesota, estimates that up to 65 percent of them suffer at least one tennis-related injury. Although tennis elbow gets the most press among tennis-related injuries, chiropractors assert that they actually see more injuries to the lower extremities, as these are the areas that absorb the force created by the arm swinging the racket. Tightness in the shoulder blades of professional tennis players can lead to muscle pain and headaches, which chiropractic care can help to relieve.

Many professional tennis players make sure a chiropractor is available to them during tournaments to help keep them in top shape throughout a game that can sometimes last for several hours. Some of the top tennis players in the world are regularly treated by a chiropractor, including Andy Murray, Roger Federer and Novak Djokovic. Andy Murray said of his chiropractor, “Jean-Pierre (Bruyere) has been helping my game for years.”

At the 2011 Men’s US Open Tennis Championship, Serbian player Novak Djokovic was battling Rafael Nadal in the final. During the last set, he was experiencing enough lumbar pain to ask for a 10-minute medical time-out, during which he received chiropractic treatment. He walked back onto the court a renewed man, and went on to win the set and the championship.

According to Venus Williams, a seven-time Grand Slam Women’s Tennis champion, “Chiropractic gives me the flexibility I need to keep me in the game.”

Ivan Lendl, a former number-one ranked tennis player and winner of eight Grand Slam singles titles, believes in the power of chiropractic care. He said, “I feel that chiropractic adjustments help to prevent injury…. I try to go twice a week to a chiropractor, sometimes even more during big tournaments. I feel I am much more tuned-up with an adjustment. I support chiropractic very much. I think it is great for sports. I think it’s great for anyone!”

Retired professional tennis player and coach Martina Navratilova won 18 Grand Slam singles titles during her career, and believes chiropractic helped her to achieve this. Navratilova said, “A chiropractor was instrumental in putting my body back together. Alternative therapies will play a bigger role in our lives. After all, people like what works.”

More professional tennis players are getting on board with chiropractic each year, following in the footsteps of such greats as Jimmy Connors, John McEnroe, Tracy Austin and Billie Jean King, all of whom have enjoyed the advantage that chiropractic care brought to their game. It may help to improve your game too!