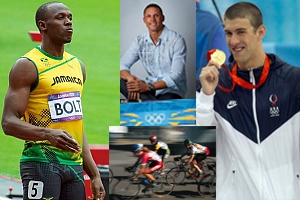 Chiropractic care has become such an indispensable tool for athletes to keep performing at their best and to reduce the time that it takes to heal from injuries that 28 Doctors of Chiropractic (DC) were employed in the Olympic polyclinic during the 2012 Olympic Games in London. This was in addition to 27 other team DCs who traveled with their nations’ teams, not to mention individual athletes’ chiropractors. Some of the greatest athletes of all time attribute a large part of their success to the chiropractic care they receive.

Dan O’Brien, after winning three consecutive world titles in the decathlon, went on to win a gold medal in decathlon at the 1996 Summer Olympics in Atlanta. He said, “If I could put a percentage value on it, I think I compete eight to ten percent better from regular chiropractic care. I think that is how much of a benefit it is – if not more. If it wasn’t for chiropractic, I wouldn’t have won the gold medal.” He continued, “Every track and field athlete that I have ever met has seen a chiropractor at one time or another. In track and field, it is absolutely essential. Chiropractic care is one of the things I think that no one has denied or refuted.” O’Brien added, “You obviously can’t compete at your fullest if you’re not in alignment.  And your body can’t heal if your back is not in alignment.  It was the holistic idea that I liked about chiropractic and that is what track and field is about.”

During an interview in the August 2012 issue of Details magazine, Olympic swimmer Michael Phelps, who has received the most (22) Olympic medals of all time, noted that he receives Graston technique treatments to keep him in top form. Phelps said, “My trainer, Keenan [Robinson], uses Graston tools, these little metal crowbars. He carves them into my shoulder blades, my back, my knee, my hamstrings—wherever I’m really tight—to loosen things up. It’s pretty intense.”

Elite cyclist Bradley Wiggins has won the most medals of any British Olympic athlete and is the first British winner of the Tour de France. He has nothing but praise for his chiropractor, Matt Rabin. Some months before the 2012 Olympic Games, Wiggins said, “I first started working with Matt at the end of 2008 following my success at the 2008 Beijing summer Olympics. After years of struggling with minor niggles that I had learned to live with, and having never really found the answer to my problems despite having sought numerous treatment options with no great success, I went to see Matt.”

Wiggins continued, “From my first session with him I had great results that were not short lived. That followed up with regular sessions I saw improvements that I had never seen before and that reflected in the way my body held up on a day to day basis which eventually saw me achieve 4th place in the 2009 Tour de France under his supervision.” He added, “Matt will undoubtedly remain an integral part of my medical support in the forthcoming seasons and lead up to the London 2012 Olympic Games.”

If the world’s fastest man, Usain Bolt, used chiropractic to keep him a step in front of his competitors at the 2012 Olympic Games, perhaps you should too!