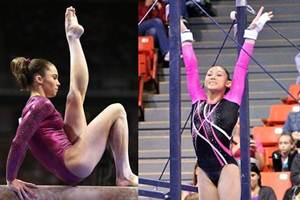 Gymnastics is among the most difficult sports and among the most demanding in terms of stresses placed on the body’s musculoskeletal system. Both overuse injuries and acute injuries are common among these athletes due to the enormous strain placed on the joints, tendons and ligaments. Gymnastics is the second-leading cause of traumatic sports injuries in female athletes (just behind cheerleading), according to the National Center for Catastrophic Sports Injury Research. This may be due to the increasing level of competition and the more advanced (and riskier) acrobatics that come with it. A significant amount of force is placed on the spine in the many bends, flips and twists that gymnastics involves. Chiropractic care has helped many gymnasts recover from injuries far more quickly than with conventional care alone, returning them speedily to competition.

McKayla Maroney, the 2011 World Vault Champion, had been injured during the pre-Olympic trials in June 2012 during a pre-meet warm-up. She had landed on her back during a flip, hitting her head hard enough to receive a concussion and fracture her nasal bone. She had to get approval from the Olympic medical board to be allowed to compete in the national team trials. The day before her assessment, she was treated by chiropractic neurologist, Dr. Shad Groves, who assessed her neurological function and performed targeted neurological treatments to restore McKayla’s equilibrium. Despite the post-injury problems she had sustained, including problems with eye-tracking, muscle weakness and lack of balance, the Olympic medical board evaluation the day after her treatment by Dr. Groves found normal balance, improvements in her muscle strength, and no eye-tracking problems. She successfully completed the Olympic team trials and went on to become one of the five gymnasts to be included on the U.S. women’s Olympic gymnastics team, going on to win a silver medal on vault at the 2012 Olympic Games in London and helping her team win gold.

McKayla’s mother, Erin Maroney, said of her daughter’s chiropractic care, “My daughter, McKayla, is an elite gymnast and spends 8 hours per day in the gym 6 days per week. She was constantly in pain due to the rigorous exercise and injuries, which are common at this level of gymnastics competition. [Chiropractor] Dr. Armstrong uses low-force chiropractic, nutrition, and Class IV Laser Therapy when treating McKayla and our family. The results are simply incredible!”

Kyla Ross, another member of the 2012 U.S. Olympic women’s gymnastics team who also placed first in the all-around at the 2009 Visa Championships, is another enthusiastic chiropractic patient who is treated by Dr. Armstrong. Kyla’s mother, Kiana Ross, says, “Kyla was having constant pain in both heels and had been misdiagnosed by several doctors over the course of 2 1/2 years. None of these doctors could find the cause of Kyla’s problem. During her initial examination, Dr. Armstrong immediately found that Kyla had a spinal cord impingement in her lower back that was causing her heel pain. He was able to relieve the pain after a couple of visits with chiropractic and the K-Laser and the pain never returned.”

Gymnasts both male and female can benefit from regular chiropractic care. Your chiropractor can keep your body in alignment and treat any misalignments before they become a problem and interfere with your performance.