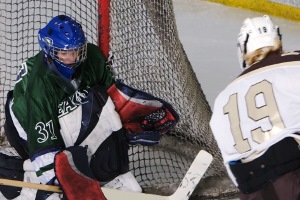 When National Hockey League (NHL) superstar Sidney Crosby suffered two concussions within days of one another, he sought the help of his chiropractor, Dr. Ted Carrick, a Chiropractic Neurologist who treats Crosby and other players in the NHL and NFL. Carrick says, “In professional hockey alone, there are more than 50,000 hits annually, and far too many of these are serious injuries to the head.” Hockey is a rough contact sport, as anyone who has been to a game can attest. As Rodney Dangerfield once famously quipped, “I went to a fight the other night and a hockey game broke out.”

All kidding aside, the risk of concussion during a hockey game is high, with pucks traveling at around 100 mph. Add to that the injuries from players colliding with each other, or being hit by hockey sticks and skate blades and you can see why hockey is a sport prone to injury. Unfortunately, the number of neck and back injuries have increased, possibly due to the false sense of security provided by protective equipment. The knee is a frequent site of injury as well, with sprains to the ligaments being most common.

After suffering 10 months of dizziness, fogginess, instability and light sensitivity, Crosby began specialized chiropractic care that improved both his physical and cognitive functioning. After 6 months of chiropractic treatment, Crosby returned to the ice and helped his Pittsburgh Penguins score a win against the New York Rangers, and the Penguins subsequently signed him to new a 12-year contract.

Chiropractic care is so important to the Vancouver Canucks that they keep a team chiropractor on staff. Dr. Sid Sheard has treated the Canucks for 24 years and says of his job, “In managing musculoskeletal problems, the team chiropractor must determine when to order the appropriate diagnostic tests and imaging studies in order to arrive at an appropriate diagnosis.” Chiropractic is not only for the treatment of injuries, it also keeps players in top form. Sheard notes, “The number of games lost to injury this year is running at less than half, which we like to think is due to the preventive and supportive training that starts in the off-season.”

Olympic silver medalist in hockey and player for the Dallas Stars, Mike Modano is a strong advocate of the benefits of chiropractic care for hockey players. He says, “Chiropractic helps with recovery time and the way my body responds with the grind it takes.”

Chiropractic care is one of the best ways that professional hockey players can ensure that they stay on the ice as long as possible.