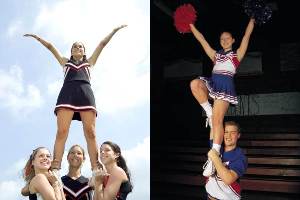 Sprains, strains and lower back pain are very, very common among cheerleaders. In fact, the National Center for Catastrophic Sports Injury Research lists cheerleading as the most dangerous sport for women. Anyone who watches elite cheerleaders in action, either during a game or at competitions, has some idea why this might be.

Cheerleading is a very physically demanding sport, particularly when participants perform routines that involve gymnastics or acrobatics or execute maneuvers that require them to support a lot of weight. Performing well as a cheerleader requires excellent balance, strength and range of motion. Chiropractic care can help prevent injuries and—when they do happen—can help cheerleaders recover more quickly.

In fact, chiropractic has made such a difference in professional cheerleading that the Washington Redskins Cheerleaders joined the Foundation for Chiropractic Progress to let others know how much chiropractic care helps both their performance and their musculoskeletal health. Both cheerleader training and the performances during the game take a toll on the body. Redskins cheerleader Amanda Mitchell says, “People don’t view cheerleading as a competitive sport, but you have to try out every single year in this industry and it takes a large toll on your body. Without chiropractic care I would not have made it past my first year. After receiving treatment, I began to notice the pain starting to subside as well as improvement in flexibility during performances.”

And when injuries occur—and they are very common among cheerleaders—getting back in condition as soon as possible is important. Professional cheerleaders find that with the help of chiropractic care they can be back in performance mode much faster. According to Redskins cheerleader Chelsea Causey, “I’ve experienced multiple injuries during my career as a cheerleader—everything from pulled hamstrings to sprains and even lower back pain—setbacks that chiropractic care has always helped me recover from.”

Studies show that chiropractic is an effective tool to prevent and treat sports-related injuries. One study published in the Journal of Manipulative and Physiological Therapeutics was performed by Dr. Jay Greenstein and colleagues on 43 professional football cheerleaders who underwent a season-long chiropractic hamstring intervention. Hamstring and other lower body strains account for half of all cheerleading injuries. Greenstein notes that “After the season closed, we found that those who had reported hamstring injury-related pain between June and September showed a significant decrease in pain after receiving treatment.”

Dr. Alex Vidan, chiropractor to the St. Louis Rams cheerleaders says, “The benefits of chiropractic treatment are felt immediately. Along with providing relief from pain, chiropractic also facilitates healing, which means there’s less downtime after an injury.” He added, “The squad performs a lot more than people think, making special appearances, and there’s a lot of travel involved, all of which can take their toll physically. The Rams cheerleaders, like many others, have found that chiropractic methods, which are gentle and noninvasive, offer relief and foster sound physical health.”