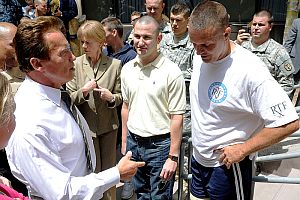 Long before his days as governor of California, and even before his acting career, Arnold Schwarzenegger was a bodybuilding champion whocould boast 13 world titles. And as any world-class bodybuilder can tell you, the sport is hard on your musculoskeletal system. Schwarzenegger was lucky enough to have his first encounter with chiropractic when he was training in the 1970s, and he has been a fervent supporter ever since.

Schwarzenegger’s bodybuilding workout partner, Franco Columbu, began attending chiropractic college during the time they were training together. “Franco would go very intensely to chiropractic college every day,” Schwarzenegger said. “He worked on me all the time. During the course of his education he got incredibly good with both the theoretical and the practical [elements of adjusting] … every time I had an injury, I could call Franco … I would get an adjustment, three or four, and the problem would be gone. So you know, when you see that happening in your own body, that with chiropractic you will be 100 percent, it’s just fantastic.”

Schwarzenegger continued, “I am very fortunate to have, so to speak, my in-house chiropractor, Dr. Franco Colombu, as my own personal chiropractor. He adjusts my wife, my kids, me, everybody gets an adjustment. And we feel always great when Franco leaves.” And “… every time that I had a problem with an elbow injury, shoulder injury, or back injury, he was always right there with the adjustments. This is the way I found out the best way of going is to use chiropractors, not only after injuries, but also before injury.”

In relation to some people’s skepticism about chiropractic’s ability to treat pain without pain relievers, Schwarzenegger said, “They say, ‘I can’t believe that this can make me feel better just like that, without a shot, without drugs…’ It is amazing, and that is what is unbelievable for people. I have seen first-hand how it works.”

As an example of how quickly and effectively a chiropractic adjustment can treat pain, Schwarzenegger related a story about a recent skiing trip: “I was really feeling something was wrong with my back. I felt even more pain at ten o’clock that night. So I called a chiropractor. By 10:30 the [chiropractor] was over at my house adjusting me … the next day I was fine and skiing again. These are the kinds of things when you experience them you feel great about this profession.”