The Latest on High-Protein Diets 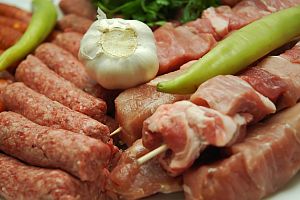 Fans of the Atkins Diet®, the Paleo Diet™, and the Dukan Diet®—all of which revolve around eating large amounts of protein to lose or maintain weight—might be well-advised to reconsider their eating habits. While these diets have been found to be effective at helping people lose weight and normalize their blood-glucose levels when practiced for short periods of time, two new studies in the March 2014 edition of Cell Metabolism indicate that they might also shorten your life. In fact, one of the studies showed that people who eat a diet high in animal protein are four times more likely to die of cancer than people with a lower protein intake. The cancer risk to the high-protein dieters was found to be almost as high as the risk of smoking 20 cigarettes per day.

Lead author of the study, Dr. Valter D. Longo, says about his findings, “Those high-protein diets were developed with a shortsighted vision. On a high-protein, high-fat diet you can lose weight, but in the long run you may be hurting yourself.” In one Australian study mentioned in the Cell Metabolism article, 858 mice were fed one of 25 diets with varying ratios of protein to carbohydrates. And the “high protein” mice were leaner. Unfortunately, they didn’t live very long compared with the mice who ate more moderate amounts of protein.

Although the study indicated that a low-protein diet in middle age is more useful for preventing cancer and all-cause mortality, interestingly enough, it also showed that older people (over 65) should avoid low-protein diets because they do not provide sufficient nutrients to protect them from frailty.

Add to these studies the fact that the American Heart Association (AHA) has stopped recommending high-protein diets for weight loss, and you have some compelling reasons for watching your consumption of protein, especially protein from animal products. The AHA recommends that adults obtain less than 35% of their total daily calories from fat, less than 7% from saturated fats, and less than 1% from trans fats. On most high-protein diets, achieving these goals is simply not possible.