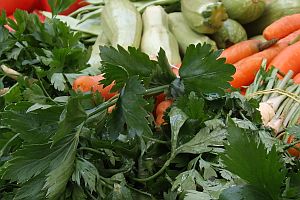 Although it may be tempting to pick up some fresh tomatoes or strawberries in the middle of winter, you might find yourself disappointed in their flavor. Thanks to the combination of industrial agriculture and global transportation, most fruits and vegetables are now available year round. However, this may not actually be as much of a good thing as it seems. Why? Not only is out-of-season produce less tasty, it is also usually not as nutritious as produce picked seasonally at its ultimate ripeness. There are plenty of winter vegetables and fruits now at their peak, and taking advantage of these sometimes neglected veggies can provide you with necessary nutrients that you may not get from produce at other times of the year.

Japanese organic farmer Masanobu Fukuoka noted that farmers were paid a premium for seasonal produce that could be supplied more than a month earlier than usual. He observed, though, that these early crops not only were reduced in flavor but also required a copious amount of energy use and chemicals. He noted that the farmers who produced their mandarin orange crop early had to use artificial colors and sweeteners to modify the early fruit so it would resemble that of the seasonal variety, resulting in both a poorer and more expensive product. Buying produce in season is both healthier and less expensive.

Apples, nuts and leeks, as well as a wide variety of squashes are all at their best. Winter butternut squash is low in calories too, at only 63 calories per cup. It also contains an abundant amount of vitamin A (beta-carotene) and potassium. Not only that, but you may be surprised to find that the amount of vitamin C contained in only a cup of squash provides half your daily requirement of vitamin C.

Kale is another incredibly healthy winter vegetable, filled with vitamins and minerals, including vitamins A, B, C and K, calcium, copper and magnesium. Kale also is high in cancer-fighting phytonutrients called flavonoids, including quercetin and kaempferol. Kale also has demonstrated the ability to lower cholesterol. Cooked kale can be easily incorporated into mashed potatoes to make for a healthy side dish.

Leeks too are abundant at this time of year. They are one of the vegetables with the highest amount of vitamin K (good for bone health and vital for blood coagulation), and have a healthy amount of folate. A versatile member of the allium family (like onions and garlic), leeks can be incorporated into soups and stews in pretty much the same way you might typically use onions. They are also tasty on their own—just braise them a little liquid. If you’re willing to put just a bit more effort into preparation, creamed leaks is an even tastier alternative. Just clean and slice 2-3 leeks thinly, then sauté them in a little butter, add a couple of tablespoons of water, and cover for about 10 minutes, until cooked. Mix in a tablespoon of flour and about ½ cup of sour cream and you have an excellent side dish to serve along with fish or chicken.

Now is the time to appreciate these healthy winter vegetables, because all too soon the season will be over. But remember—there’s good news just around the corner… Before you know it, the strawberries you’ve been craving will be back in season!