Is There Really a “Gender Gap” in Children’s Fitness? 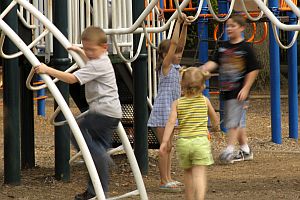 It’s no secret that public health officials and the medical community are concerned about the physical fitness of American boys and girls in general. But recent data from a variety of sources suggest that girls may be significantly less likely than boys to get the exercise they need. And worse still, this physical activity “gender gap” between boys and girls appears to get larger as children get older.

According to an analysis of the combined 2012 National Health and Nutrition Examination Survey (NHANES) and NHANES National Youth Fitness Survey (NNYFS), only one-quarter (24.8%) of youth between 12 and 15 years of age get 60 minutes of moderate-to-vigorous physical activity every day. Obviously, this statistic is NOT good news. However, a closer look at other data* reveals that:

This means that by the time a boy and a girl are 15 years old, the girl is only half as likely as the boy to get the recommended exercise.

Since we’re talking about levels of physical activity generally rather than participation rates in organized sports, the gap seems to be a cultural one rather than one of access. Traditionally, we have thought of certain sports as being more appropriate for either boys or girls. For example, boys have been expected to enjoy rougher sports like football or hockey, while girls have been expected to be drawn to athletics involving less exertion and contact. These kinds of stereotypes no longer hold, and there are clearly more options today for members of each sex to participate in sports that they really like. At the same time, some patterns do exist.

How Girls are Physically Active

As a very general rule, girls continue to be more likely than boys to participate in activities like dance, gymnastics, cheerleading or aerobics. That said, sports like soccer, basketball, softball, volleyball, swimming and skiing all offer opportunities to develop physical skills in the same sort of environment that boys find familiar.

How Boys are Physically Active

Boys are still more likely than girls to engage in more intense physical activities and contact sports. While the popularity of traditional American team sports like baseball, football, soccer and basketball has ebbed and flowed over time, other less mainstream sports like martial arts, hockey and lacrosse have become more common.

The Real Priority in Children’s Fitness

The most important thing for parents and school leaders to address is the overall need for both boys and girls to remain active as children and young adults. This means creating engaging, accessible opportunities for both genders. But it also means actively encouraging girls to participate and shifting the cultural norm toward being more physically active.

There are a number of reasons that physical activity is important for children of both genders and all ages:

Despite the differences in the types of physical activities girls and boys tend to prefer, children of both sexes need regular physical activity to stay strong and healthy. The habits they develop early on will help them establish healthy lifestyle patterns as they grow into young adults!