Is Tea Healthier Than Coffee? 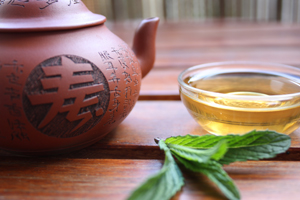 Seemingly every other day another study comes out that has found some additional health benefit to tea drinking. The list of diseases and conditions tea is believed to assist or prevent seemingly grows longer by the minute. On the other hand, coffee has been vilified for a number of years, in particular the caffeine it contains. But recently, new studies have shown that coffee is actually protective against some diseases and may be good for you in moderate amounts. So what is a person to think? If you have to choose between tea and coffee, which is the healthier choice?

Tea is rich in catechins, which are antioxidant polyphenols. These have been shown to reduce the action of free radicals in the body that cause damage to our cells. Tea is one of the highest sources of this type of antioxidant in the Western diet. Both black and green tea have been shown to lower the risk of heart disease, and green has the added benefit of reducing cancers such as that of the breast and ovary. Green tea has three times the catechins of black tea.

Coffee, on the other hand, reduces your likelihood of contracting type 2 diabetes, which is one of the most prevalent chronic diseases in the country. Studies have shown that drinking at least three cups of coffee a day can reduce inflammation in the body, lower glucose levels in the blood and improve the body’s use of insulin. This is the case with either caffeinated or decaffeinated coffee, so caffeine is not the active ingredient that leads to these health benefits. It is the antioxidant chlorogenic acid that is thought to be the beneficial compound in coffee.

Both tea and coffee contain caffeine, with approximately 180 mg in an 8-ounce cup of coffee, 43 mg in the same amount of black tea, and 30 mg in green tea. If you are sensitive to caffeine, then you might want to stick to tea (or limit yourself to one small cup of coffee per day). High intake of caffeine can also deplete the calcium from your bones, and should be avoided by pregnant women due to an increased risk of miscarriage.

So both are good for you in one way or another. Drinking a little of each every day seems like a good solution if you want to achieve the greatest health benefits from a warm beverage. Just try to skip the sugar, as the sugar added to either coffee or tea can largely negate the benefits. Excess consumption of sugar is one of the leading causes of diabetes, and scientific research has found it to be a contributing factor to cancer and heart disease. Whether you choose coffee or tea, by drinking each in moderation remains the best approach to your overall health.