Is it Possible to Lose Weight in Some Areas of Your Body Without Losing Weight in Others? 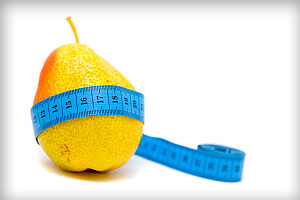 Many people have weight management issues, not only the overweight or obese. In many cases, it’s the way their excess weight is distributed that bothers them.  Some people have body proportions in which their upper body is of normal weight, but they store excess fat in their hips and thighs. Or they have thin arms and legs, but sport a “pot belly.” It would be wonderful if we could target weight loss to these particular areas, but is such a thing actually possible?

For the most part, targeted weight loss is a myth. A wide array of fitness programs and exercise machines claim to be able to target certain areas, such as giving you six-pack abs in place of your jelly belly. However, science shows that targeting exercise to the area you would like to slim down is mostly ineffective. In fact, too much exercise may interfere with your ability to lose weight at all. Some people’s metabolism will go into calorie conservation mode when exercising vigorously for a long period of time, in an attempt to conserve resources. Those stomach crunches are good for strengthening and toning your abdominal muscles under the fat, but it will not reduce the amount of fat in the belly area.

A study performed by researchers at the University of Connecticut assessed the amount of subcutaneous fat in the arms of 104 participants before and after a 12-week resistance training program. Their non-dominant arm was selectively exercised during the study, and at the end of 12 weeks, the fat lost was found to have occurred equally throughout the body rather than being concentrated around the trained arm. Because of the way that stored fat is chemically mobilized, the energy that comes from our fat is released from fat cells that are located throughout the body. However, even though fat is burned equally from all parts of the body, certain factors influence where that fat is stored in the first place.

Genetics do play a role in whether you will store fat in your thighs, in your belly or elsewhere. For example, in most cases where people are pear-shaped (fat stored in hips, thighs and buttocks), it is likely due to genetic factors. Fat that is stored primarily in the abdominal region is most often due to stress. A Yale study found that even naturally slim women were likely to have belly fat if they were stressed on a regular basis. Stress activates the hormone cortisol, which has more receptors in abdominal fat than in the fat in other areas of the body. So if that is your problem area, aim to reduce stress levels. Meditation, yoga and light exercise are good stress reducers and may positively affect your waistline.

Your best bet to reduce fat in problem areas is to eat a balanced diet that stresses whole, unrefined foods that will moderate your blood sugar so that fewer calories are stored as fat. And if you exercise moderately on a regular basis, your target areas will slowly begin to slim down.