Is Chiropractic Safe During or After Pregnancy? 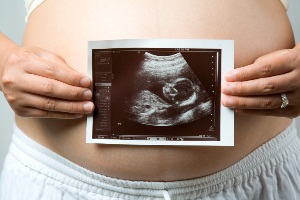 Low back pain is a common complaint among pregnant and post-partum women due to the extra weight they carry during the nine months of gestation.   For this reason, it is not at all surprising that many pregnant women and new mothers seek chiropractic treatment to relieve their discomfort.  However, we believe that women who are expecting or who have recently given birth should seek the advice of their physician anytime they are considering any sort of medical treatment at this point in their lives.  Chiropractic care is no different.

What does science have to say about the safety of chiropractic adjustments for women before and after having a child?  Three North American chiropractors reviewed the literature to look for evidence of adverse reactions to spinal manipulation therapy (SMT) in both pregnant and post-partum women (post-partum here being defined as up to six weeks following childbirth).  In their research, they identified two appropriate review articles and five study papers.  Four of these papers were case reports and the fifth was a cohort inquiry.

The cohort study reported that only three of 78 pregnant and post-partum patients described any form of adverse reaction to SMT.  In all three cases, the adverse reaction was an increased level of pain, which resolved in less than one week with no additional complications.  Both of the review articles noted the general absence of reported adverse effects following spinal manipulation carried out on pregnant and post-partum women.

Given the number of pregnant and post-partum patients treated by chiropractors, it is reasonable to conclude that the low number of reports of adverse reactions indicates that SMT is likely safe to perform on women in this condition.  Although there may be a number of unreported post-treatment complications, this seems unlikely.  It is also worth adding that spinal manipulation in patients outside of this treatment group may also infrequently cause increased levels of pain and other issues.  The relatively low number and severity of post-treatment problems observed in the cohort study also add weight to the overall argument in favor of the safety of SMT during and immediately following pregnancy.

Provided that SMT is performed within the usual therapeutic guidelines, the existing evidence suggests that the benefits of reduced pain and a potentially easier delivery are likely to outweigh the risk of complications for pregnant and post-partum women.  While additional studies (and improved reporting of problems following treatment) would be beneficial, there is no reason to believe that future findings will contradict the overall conclusion that SMT is safe to carry out on pregnant and post-partum patients.