How to Practice Yoga Safely 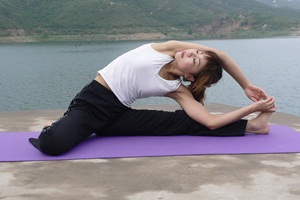 Many people see yoga as being a calm, peaceful form of exercise (which it is) that does not put any stress on the body (which it definitely can).  The truth is that yoga is very good exercise, and may be particularly useful for individuals who have difficulty practicing other forms of exercise because of pain in their knees, hips or back.  Part of the reason that yoga is good for just about everyone is that it stretches and strengthens muscles without putting excessive strain on the joints.  However, it is possible to be injured by practicing yoga if you are not properly prepared, do not follow the correct technique or attempt to do things beyond your body’s current ability.

Yoga is becoming more popular every year due to its proven benefits for both the body and mind.  That said, the growing number of people practicing yoga is also leading to an inevitable increase in the number of people getting hurt doing it.  Let’s put this in proper perspective and then talk about what we can do to practice safer yoga:

In 2007, there were about 5,500 yoga-related injuries treated by a doctor or hospital in 2007.  Since roughly 15.8 million people were practicing yoga that year, we can estimate an injury rate of 3.5 people out of every 10,000.  That compares with an injury rate of about 15 per 10,000 in weight training and 39 in golf.  So—relatively speaking—yoga very unlikely to land you in an emergency room or doctor’s office.  Nevertheless, there are certain things to keep in mind while practicing yoga to help ensure you do not become one of those 3.5 in every 10,000 who are injured…

Some poses (called asanas) require a certain amount of skill to be practiced safely.  A good yoga teacher will stress the importance of not doing more than you feel comfortable with and will be able to offer alternative forms of the same pose that can provide you with many of the same benefits of the more advanced pose while allowing you not to strain anything.  As you advance in your practice, you can gradually work up to the formal pose once the appropriate muscles have been adequately strengthened.

If you are just beginning to practice yoga, enroll in a beginner’s course and choose a simple form of yoga (such as Hatha or Iyengar) that emphasizes the proper alignment of each pose.  Jumping directly into something more demanding like Bikram or Vinyasa yoga may increase your risk of injury because these more complex forms will not allow you enough time to learn the correct postures or for your body to adapt to them.  In these more advanced forms of yoga, the emphasis is often placed on achieving a smooth flow from one pose to another (sometimes in a hot room) in what can be a very complex sequence of movements.  Clearly this is something you’ll be much better prepared for if you’ve first become proficient in the poses themselves.

The key to practicing safe yoga is to be in tune with your body and listen to what it is telling you. While yoga should cause your muscles to stretch and work, you should stop immediately if you feel you are straining excessively or if any pose creates pain.  That’s the time to do a less vigorous form of the pose or to simply rest in child pose (lying face-down on the floor with your knees to your chin and your arms stretched in front of you or with your hands at your ankles).

If you have any type of injury, be sure to tell your yoga teacher before class begins so that he or she can demonstrate variations of the poses that take your limitations into account.  Practicing yoga is a great way to reduce stress while strengthening your entire body, increasing flexibility and improving your overall sense of well-being.  And by practicing it safely, you’ll be able to enjoy these benefits for years to come.