How to Improve Your Self-Control 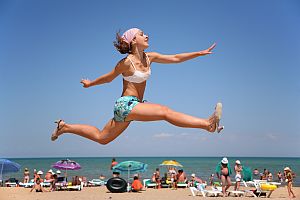 There’s a well-known quip that goes “It’s not my willpower that I have problems with, it’s my won’t power.” Whether it’s dieting, quitting smoking, or just getting out of bed in the morning, our willpower is put to the test nearly every day. Some people seem to have more of it than others. So are there things you can do to improve your self-control? Experts suggest that there are.

Self-control is like a muscle. The more you use it, the stronger it becomes. And the benefits to your life overall are considerable. Dr. Roy Baumeister, professor of psychology at Florida State University, says “Kids do better in school, people do better at work. Look at just about any major category of problem that people are suffering from and odds are pretty good that self-control is implicated in some way.”

In some ways, self-control is a finite resource. In a scientific study, subjects who were asked to exert self-control on a first task did worse on a second similar task. This was in contrast to their counterparts in the control group, who did not have to use self-control for the first task and performed just as well on the second task as the first.

Self-control has been shown to be associated with blood glucose levels. The lower your blood glucose, the less your self-control. This may be a large part of the reason why dieting is so difficult. Dieticians’ advice to dieters to eat several small meals a day is likely due to this phenomenon. “You need the energy from food to have the willpower to exert self-control in order to succeed on your diet,” Baumeister said.

Interestingly, a study conducted by researchers at the University of Georgia found that it was not necessary to ingest glucose in order for it to have an effect on willpower. In the study, published in the journal Psychological Science, researchers divided study subjects into one of two groups. They had the first group rinse their mouth with lemonade sweetened with sugar, and the second group rinsed their mouth with lemonade sweetened with Splenda, which does not raise blood glucose. The first group did far better on self-control tasks than the Splenda group. The lead author, Leonard Martin, wrote, “Researchers used to think you had to drink the glucose and get it into your body to give you the energy to (have) self-control. After this trial, it seems that glucose stimulates the simple carbohydrate sensors on the tongue. This, in turn, signals the motivational centers of the brain where our self-related goals are represented. These signals tell your body to pay attention.”

Both sleep and remembering powerful emotional experiences can have a positive effect on self-control. Laughing or watching a comedy film increased subjects’ self-control in scientific studies. Distraction is also useful. If you can distract yourself with something else (looking at cute cats on Facebook, for example), you are less likely to be tempted to give in to impulse.

Experts advise that like any exercise, you start small and work your way up. New Years’ resolutions are so often broken because people decide to change too many things at once. Pick one resolution, such as quitting smoking, and work on it until you have mastered it. Then you can move on to another. You are far more likely to be successful that way.