How Might Breath Analysis Change the Future of Diagnostic Tests? 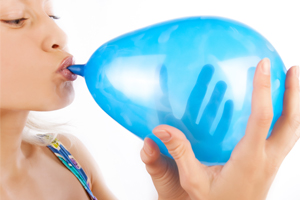 Imagine having diagnostic tests taken that were painless, fast, less expensive than a blood test, and could easily be performed multiple times, even while exercising or sleeping. Scientists have been developing devices that can do just that by measuring certain components in the breath. Although it may seem more like something in a scene from Star Trek, the possibility of this type of test becoming a reality is just around the corner. Professor of mechanical and aerospace engineering, Dr. Christina Davis, from the University of California, Davis, says “The field is at the point where we’ll start to see some exciting developments in the next one to four years.”

Much the same as a fingerprint, everyone has a unique “breath signature” that can identify a whole array of compounds, including oxygen, carbon dioxide, nitrogen, proteins, peptides, DNA, antibodies and volatile organic compounds that are formed during certain of the body’s metabolic processes, and which may indicate the presence of disease. By being able to identify the thousands of chemical compounds exhaled in a person’s breath, a tool such as a mass spectrometer can help to diagnose a host of disease conditions such as diabetes, asthma, tuberculosis, gastrointestinal problems, and liver and kidney disease. Raed A. Dweik, the pulmonary vascular program director at the Cleveland Clinic’s Lerner Research Institute says, “Anything you can have a blood test for, there is potentially a breath test for, as long as there is a volatile component.”

Although current forms of mass spectrometry have a billion times greater sensitivity than the devices used by the police to measure blood alcohol levels and can measure and determine which specific volatile organic compounds are contained in the breath, they are still cumbersome and expensive. Therefore, scientists are exploring ways of developing devices that use sensor arrays, which are smaller and less expensive and can detect certain scents in much the same way that dogs can pinpoint specific smells. The only drawback is that they must be trained, as dogs are, in what sorts of things that they should be looking for.

Dr. Peter Mazzone, the director of the lung cancer program at the Respiratory Institute at the Cleveland Clinic says, “My vision is being able to say, ‘This is a 60-year old with emphysema who smoked for 30 years—what’s the chance of there being cancer there?’ But we have to teach the device what it looks like first.”

The benefits to this technology would be many, including reducing the number of biopsies performed. Researchers believe that breath analyses can be used in conjunction with CT scans to keep more extensive and costly tests to a minimum, however, there is still work to be done in organizing more clinical trials so that these breath tests can be validated and standardized. Dr. Dweik notes, “For doctors and the FDA to buy into this concept, we have to tell them what we are smelling and why and how that compound is related to the disease process.”