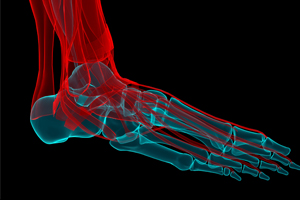 If you have been suffering from constant or intermittent pain or have felt tingling or numbness in your extremities that just won’t go away no matter how much ibuprofen you take, you may be suffering from peripheral neuropathy. An estimated three to eight percent of the population suffers from this disease, a condition in which the signals traveling between the body and the central nervous system (the brain and spinal cord) are interrupted, causing sensations ranging from pain to burning, tingling and numbness, and can also involve weakness and wasting of the muscles. It is particularly prevalent among those who have diabetes and becomes more common as we age.

Although nerve damage can be tricky to treat, some forms of the condition are easier to treat than others. Peripheral neuropathy caused by diseases such as multiple sclerosis, lupus, AIDS and cancer are the most difficult. However, a significant percentage of cases are due to more easily treatable causes such as vitamin deficiencies and compressed or trapped nerves. All of the above can be helped to a lesser or greater extent by applying a variety of treatment options; among the most useful of these are an improvement in diet and receiving regular chiropractic care.

Getting oxygen and nutrients to damaged nerves is key in treating peripheral neuropathy, which is why eating plenty of fruits and vegetables rich in vitamins and antioxidants is important. These will feed the nerves and help to destroy the free radicals that cause damage to the body’s cells, leading to an interference with nerve transmission.

Neuropathy of the arms and legs is the second most common ailment treated by chiropractors, according to the National Board of Chiropractic Examiners. When the vertebral joints of the spine begin to degenerate (which is common as we get older) it can press on the roots of the spinal nerves, causing the classic symptoms of neuropathy. Chiropractors are trained to relieve this pressure, performing spinal adjustments to bring the vertebrae back into alignment, releasing trapped or compressed nerves. Some chiropractors also use the fascial release technique or Active Release Technique (ART) to help release nerves that may have become impinged by the fascia (connective tissue).

According to a study published in the British Medical Journal in 2004, chiropractic adjustments, “with or without exercise, improved symptoms more than medical care did after both 3 and 12 months.” And in 2008, the Journal of Chiropractic Medicine reported that “patients showed an 85.5% resolution of the nerve symptoms after only 9 chiropractic treatments.”

Chiropractic is a safe, gentle and drug-free treatment that is effective in dealing with many cases of peripheral neuropathy. Your chiropractor can evaluate your particular situation and recommend a course of treatment that is right for you.