How Chiropractic Care Has Helped Me: Introducing Tony Schumacher 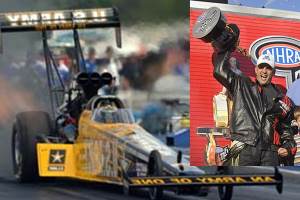 Tony Schumacher is a seven-time world champion in the NHRA Top Fuel class of drag racing. During his long career, this race car hero has set all kinds of speed records. In 1999, he was the first driver to break the 330 MPH barrier during competition. However, things took a turn for the worse on October 7, 2000 during a qualifying race in Memphis, Tennessee.

Schumacher said, “I woke up that morning, I was in a great mood. I just felt like a champ. I got in that race car, and I thought to myself, ‘There is no possible way we can lose this world championship.’ I was on probably one of my best runs ever.”

With an 8,000 horsepower engine behind him, Schumacher reached over 300 mph in a little over 4 seconds. He explained, “That’s more acceleration than the Space Shuttle astronauts or the fighter pilots off the aircraft carriers.” The rear wing of the dragster provides thousands of pounds of downward force to help keep the car from going airborne. After about 1000 feet, at 320 mph, Tony Schumacher’s car fell apart. The wing came off and then everything went haywire.

As it was designed to do, the car came apart to reduce the shock of impact and the driver’s pod took off on its own. “I remember it being intensely loud,” said Schumacher about the accident. Remarkably, he survived. He had to be cut out of the roll cage and it was only then that everyone knew he was still alive.

Flown 14 miles by helicopter to the Elvis Presley Trauma Center, x-rays revealed serious injuries to his legs, including a fracture at one ankle. That alone could have ended his career, even if he survived the surgery. Thankfully no fractures were found in his neck or spine. After his condition was stabilized, Schumacher’s wife, Cara, had him transferred to OrthoIndy in Indianapolis where a team of specialists treat race car injuries. Tim Weber, Orthopedic Trauma Surgeon, treated Schumacher for his broken ankle, realigning the bone and fixing it in place so that it would heal properly.

Even in severe pain, the only thing Schumacher wanted to do was race again. But as his bones healed, he was still beset with debilitating headaches and dizziness. His doctors had no idea what was causing his pain. He also complained of discomfort in his neck, and his middle and lower back. He decided to consult with chiropractor Marshall Dickholtz, DC, a Board Certified NUCCA Physician at HealthSmart in Northbrook, IL.

Dr. Dickholtz said, “What we found with him was that his body was leaning off to the left and one hip was actually four degrees lower on one side.” After a simple chiropractic adjustment, repeated over several visits, Schumacher felt like his old self again. He said, “It was amazing. It’s one of those things where I sat up. Everything was gone. No pain. Color was back in my face, and I thought to myself, ‘It’s like magic’.”

Only one month after his leg cast came off, Schumacher was racing again. He said, “I love what I do.” Within four years, he was once again a champion of his sport.