How Chiropractic Care Has Helped Me: Introducing Hines Ward 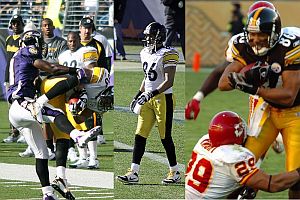 If you follow football at all—even if you’re not a Steelers fan—you’ve probably heard the name Hines Ward. He wore number 86 for the Pittsburg Steelers from 1998 to 2011. He was Super Bowl XL MVP, and is one of very few football players who have made 1,000 receptions or more in his career. Only seven others can claim that feat. During his time on the field, he was a truly exceptional wide receiver, the sort of player who repeatedly did things that others never could.

Being a professional athlete in any sport has its challenges. In terms of sheer physical punishment, football has more than most. Ward summed this up, saying, “In this game you have to take care of your body. Over the course of a game your body just feels wrecked. Every Monday it hurts to get out of bed. I told my chiropractor, I want to feel good in the morning. A lot of my credit goes to him for keeping me healthy.”

He found ways to bounce back from injuries and played harder at winning than most. Life, however, had not always been so sweet for this starring wide receiver. Ward was born in Seoul, Korea of a Korean mother and an African-American father. Soon after the family moved to Atlanta, his father left. His mother worked two or three jobs, seven days a week, to make ends meet. His estranged father fought for custody, but his mother persisted, building a life for herself by gaining custody of her son and buying her own house. She did these things despite her inability to speak English. Ward learned to appreciate his mother’s hard work and perseverance. That attitude served him well later on the field, earning him admiration from many of his fellow players.

In college, Ward gave a stellar performance on the field, attracting the attention of professional teams. With the University of Georgia Bulldogs, he achieved a second-best in team history with 1,965 yards and 149 career receptions. After graduation he was drafted by the Steelers.

As a devout fan of chiropractic, Hines Ward is no stranger to unconventional therapy. Like many other athletes, he swears by the hyperbaric chamber, an oxygen-rich environment which seems to help many sports stars heal more quickly. He calls it his “fountain of youth.”

As much as anyone, Ward understood that his body was his most important piece of equipment and needed to be kept in tip-top condition. And he has been very appreciative of the help he has received in accomplishing that daunting goal. He wrote to his Pittsburgh chiropractor, Dr. Brad Klueber, “To Dr. Brad, Thanks for the help.”

After retiring from the Steelers, Ward has continued to lead a busy life. He returned to Korea and used a million dollars of his own money to create the Hines Ward Helping Hands Foundation in support of multiracial children in Korea. He also won season 12 of Dancing With the Stars, along with partner Kym Johnson.

Hines Ward remains a hero to many in every sense of the word.