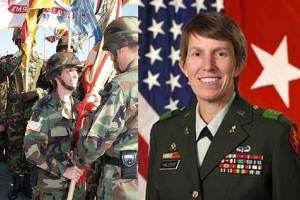 Retired Brigadier General Becky Halstead is no stranger to pain. She spent her entire adult life in the military, and was the first female graduate from West Point to become a general officer. She has seen battle all over the world, including in Iraq. But she has also fought her own personal battle—with fibromyalgia.

Fibromyalgia is a condition that is still not fully understood, but it involves symptoms that include headaches, fatigue, muscle pain, anxiety and depression. “It’s as if your whole body is a bruise … You hurt everywhere,” Halstead says. Even something as simple as showering was painful. “The water hitting your skin, it would feel like it was tearing.”

The conventional treatment for fibromyalgia involves pharmaceuticals, which Halstead took for a number of years. However, the drugs have only limited effectiveness, and she did not want them to affect her job. She said “I knew it wasn’t going to kill me—I was just in pain, so I took myself off all prescription drugs when I went into combat. I was in charge of 20,000 soldiers. That’s a huge command, a huge responsibility. I wasn’t going to have someone doubt or wonder whether the prescriptions influenced me or my decisions.”

However, it became impossible to continue in the military while dealing with debilitating pain, so she retired from the army in 2008. It was then that she began semi-monthly visits to a chiropractor, and that’s when her health began to turn around. Within a year of beginning chiropractic treatment, she was able to discontinue taking pharmaceuticals entirely by combining regular chiropractic spinal adjustments with nutritional supplements.

Halstead says of chiropractic care and how it has helped her, “It’s not like you’re cured, but you feel so much better. They set me on a path of getting well. I’m the healthiest I’ve been in 10 years. I was taking eight or 10 prescription drugs in 2008. The more I went to the chiropractor, the less prescriptions I needed.” She continued, “When I retired, my pain was easily a 9 or 10 (on a 10-point scale) every single day. My pain now is a 2 or 3, and maybe even sometimes a 1. I don’t think I’ve hit a 10 since I started regularly seeing a chiropractor.”

“If I had known how much chiropractic care would help me when I was a commander in Iraq and in the United States, I could have taken better care of my soldiers.” Although chiropractic care for military personnel was approved by congress, there are still many treatment facilities that do not have a chiropractor on staff, which Halstead would like to see changed.

“Until we’ve done that we have not fulfilled our leadership responsibility,” Halstead said. “If you want to help them, see a congressman and ask ‘aren’t our men and women getting these benefits?’ I’m not a chiropractor I’m a satisfied patient, a beneficiary of their talented hands, minds, and hearts. Go find yourself a chiropractor and change your life!”