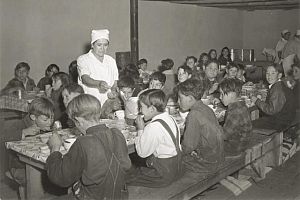 The hard truth is that very few children and adolescents talk about the subject of “school lunch” in a positive, enthusiastic way. And to be honest, not very many grown-ups do either. After all, most adults have long enough memories to recall cafeteria trays filled with “mystery meat,” overcooked canned vegetables, and—somewhat more recently—dishes prepared using the “lean, finely-textured beef” more popularly known as “pink slime”.

But things are changing, thanks in part to a 2010 initiative called the Healthy, Hunger-Free Kids Act, which sought to reduce the soaring rates of childhood obesity. These guidelines called for a new set of nutritional guidelines in which students—especially those from low-income households—were given more access to fruit, vegetables, and whole grains, with less dependence on meat products. The reaction to these guidelines has been ambivalent over the past few years, with some school districts and taxpayer groups “pushing back” over concerns that vegetables and fruit would go largely uneaten, resulting in increased food waste and thus wasted money.

Several years later, a new study published in the American Journal of Preventative Medicine seems to indicate that skeptics’ fears about wasted food have been unfounded. Among the 32 million American students who receive government-subsidized meals at school, consumption of healthier fruits and vegetables is up, and food waste (although still high) has not risen.

The study examined the eating habits of 1,030 elementary and middle school students in low-income districts of Massachusetts to track the items they selected for lunches, and how much was eaten versus discarded. The overall proportion of entrees consumed rose by 15.6%, indicating that students felt the quality of the food was better. The percentage of students selecting fruit jumped by 23%, resulting in a significant rise in overall consumption. While the percentage of students selecting vegetables remained about the same, the portion consumption increased by 16.2%.

Food waste levels remained high, meaning that both unselected portions and not-fully-eaten portions are still an issue, but there has been no overall increase in food waste since the program was implemented. These findings are seen by study author Juliana C. Cohen as positive: “Many low-income students rely on school meals for up to half of their daily energy intake. Therefore, school meals can have important implications for student health. Increased consumption of healthier foods during the school day may result in the displacement of energy-dense, nutrient-poor foods that many students are exposed to after leaving school grounds.”

Still, parents can help by trying to serve more portions of healthy fruits and vegetables at home, to “mirror” the lunches their children are getting in schools. They can also try to encourage their kids to eat more of these healthier foods so they leave less of them partially uneaten, both at home and at school. And, of course, parents can help by providing more foods and drinks that are healthier and don’t encourage childhood habits that could lead to adult obesity.

So talk to your kids about the meals they’re getting in school, and try to find out what they like and don’t like. If they’re not getting enough fresh fruit, send some along with them so that they don’t have to rely on the school lunches to get all they want. If they like vegetables at school that you don’t normally serve at home, consider adding them to your menu plans so that they will eat more of them, and less junk food. The U.S. Department of Agriculture is trying to do its best to ensure that the nation’s kids eat a more healthy diet, but most of the responsibility is still yours, as parents. Try to encourage the positive trends found in this study, and to not feed your kids sweets and low-nutrition junk foods that contribute to making them fat and unhealthy.