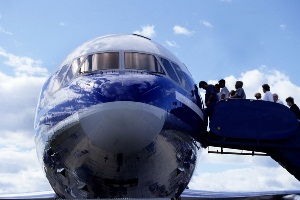 Back in the early days of commercial flight, flying was a costly, exclusive and elegant form of travel. People would dress in their best clothes and be treated like celebrities by flight attendants. Most frequent flyers would tell you that those days are long, long gone.

Even as air transportation has become far less expensive and more widely available over the years, the experience itself has generally become less pleasant. Extensive security checks, crowded planes and airline cost-cutting all play a part.  However, did you know that there are a number of aspects to flying that can also be detrimental to your health, especially if you’re a frequent flyer? Following are a few of the health risks you should be aware of if you must fly often.

Noise-induced hearing loss – The white noise of a plane may be able to lull us to sleep, but it is still loud enough to be to cause hearing damage with regular exposure. Those who sit at the back of the plane fare worst, as those passengers get the brunt of the engine noise, which can sometimes rise as high as 100 decibels. For comparison, the noise of heavy traffic is around 80 decibels and normal conversation is approximately 60 decibels. If you can, try to get a seat nearer to the front of the plane, where the average noise level is about 75 decibels. Experiencing this level of sound once in a while is not bad, but frequent flyers risk permanent damage to their hearing unless they take precautions to protect their ears, such as by using earplugs.

Deep vein thrombosis (DVT) – Also sometimes called “economy class syndrome,” this can be a life-threatening condition in which blood clots form in the legs due to being seated in cramped conditions for long periods of time. These clots sometimes break free and can travel to the lungs, causing a pulmonary embolism. Those in business and first class are not entirely immune either, however. An examination of 68 deaths on flights due to DVT found that 12% of the victims were in first or business class. To prevent this, there are a number of strategies you can employ, including wearing special “flight socks,” taking aspirin, drinking water and walking around periodically during the flight.

Increase in disease risk – Although the disease you are most at risk of contracting is the common cold, your risk of catching a cold when flying is over 100 times greater than if you had not flown. Although studies have shown that the plane’s air recirculation system is not the cause of increased illness, the fact remains that people still get sick far more often after a flight. One of the primary reasons for this is the extremely low humidity in the cabin. This dries out the mucus membranes in our respiratory tract that tend to catch harmful microbes and destroy them before they can cause damage. If you are concerned, you can purchase a special respiratory mask that will screen out 98% of airborne particles. You may look a bit unusual, but at least you have a better chance of remaining disease-free.

Jet lag – The disturbance of your circadian rhythms can cause both physical and mental impairment for a number of days after the flight. Jet lag creates a disruption to your sleep and hormone patterns that can lead to short-term episodes of psychosis for some. If your trip crosses fewer than three time zones you will probably not have a problem. If your trip is going to last for fewer than three days, experts recommend that you keep to your “home time” to avoid symptoms of jet lag. Otherwise, your best bet is to try to adjust to local time as quickly as possible. Stay up as late as is normal at your destination, then get up at a normal hour in the morning and expose yourself to bright light for as long as possible.