Head-to-Head: Chiropractic Adjustments or NSAIDs for Acute Lower Back Pain? 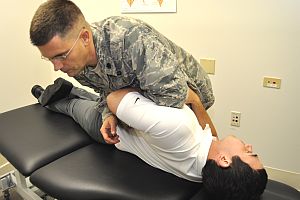 Lower back pain (LBP) is so widespread that it was listed in the 2010 Global Burden of Disease report as being the single leading cause of disability worldwide. Over half of all working Americans have lower back pain symptoms each year, resulting in lost work time and enormous expense – Americans spend over $50 billion each year to treat their back pain.

So it’s not surprising that a great deal of research is being conducted to determine the most effective methods for treating acute LBP. Much of this research has sought to compare the effectiveness of spinal manipulation (the sort of adjustments performed by Doctors of Chiropractic) with nonsteroidal anti-inflammatory drugs (NSAIDs). While these studies have generally not produced definitive findings one way or the other, they have served to highlight potential safety concerns related to NSAIDs. For example, investigators in one study found that diclofenac (an NSAID commonly used to treat LBP) increased the risk of gastrointestinal complications by 54% and posed other risks to the kidneys.

Given the added concern about NSAID side effects, researchers and clinicians have had a renewed interest in learning whether drug-free manual therapies—chiropractic care, in particular—can really be just as effective, but safer. According to a recent study published in the April 2013 edition of the journal Spine, the answer is YES! In fact, the research team that conducted the study found that chiropractic adjustments were both safer and FAR MORE EFFECTIVE.

Perhaps unsurprisingly, about half of the participants in the “control” group receiving no treatment dropped out of the study because of intolerable pain. Comparing the remaining no-intervention subjects and the two remaining intervention groups, researchers found that the group receiving chiropractic high-velocity low-amplitude (HVLA) manipulation fared significantly better than the group being treated with diclofenac and the control group.

Researchers reported a clear difference between the two intervention groups: “The groups receiving spinal manipulation showed a faster and more distinct reduction in the RMS [root mean square, a standardized test of flexibility and mobility]. Subjects also noted a faster and quantitatively more distinct reduction in their subjective estimation of pain after manipulation.” They also found that the group treated only with the NSAID diclofenac required more rescue medication (paracetamol) than the spinal manipulation group, taking 3 times as many tablets and for twice the number of days. No negative effects were reported from the spinal manipulation group, but several negative effects were reported from the diclofenac group.

So, overall, this study indicates a clear “win” for chiropractic in the treatment of acute lower back pain. Not only does HVLA spinal manipulation avoid the potential safety concerns of NSAID medications such as diclofenac, it has been found to be far more effective. Remember this the next time you experience lower back pain, and consider seeing your chiropractor first. This one simple decision may help you recover more quickly and more completely while also helping you avoid the negative side effects of NSAIDs.