Got Neck Pain? Upper Back Adjustments Can Help! 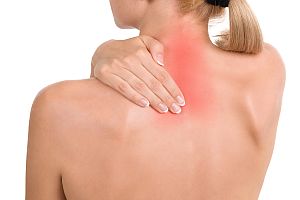 Almost everyone experiences neck pain from time to time during their lives. Doctors estimate that on any given day, 10% of the adult population is suffering from a “stiff neck.” However, it’s a different story when that neck pain persists and becomes chronic. Chronic neck pain can result in both physical and emotional distress. Employment statistics suggest that neck pain is second only to back pain as a cause of missed work, affecting as much as 45% of the workforce.

If you have experienced chronic neck pain yourself, you may know that traditional medical doctors offer relatively few treatment options. You may also know that most of these options are intended only to manage the pain, not to address the underlying cause. However, recent research published in the Journal of Manipulative and Physiological Therapeutics is hopeful, suggesting that chiropractic spinal manipulation significantly improves patients’ neck pain in a short amount of time.

In the study, 60 patients with chronic non-specific neck pain received spinal manipulation delivered by chiropractors in a double-blind, randomized trial. Two groups of 30 patients were created, and two different techniques of spinal manipulation were employed to adjust the thoracic vertebrae in the upper back. One technique had the patient lying prone (face down), and the other had the patient supine (face up). Measurements were taken before manipulation, immediately afterwards, and twenty minutes later. Little or no difference was found in the relative effectiveness of the two techniques, but both groups reported significantly reduced neck pain, while objective measurements showed significantly improved mobility (cervical range of motion) and a reduced sensitivity to pressure pain.

This study‘s findings correspond with an earlier study that compared the effectiveness of manual therapies provided by a chiropractor, a medical doctor, and a physical therapist to relieve neck pain. In that study, the success rate of the chiropractic groups at the seven-week mark was two times better (68.3%) than the other two groups. Patients in the study were able to use far less medication to treat their pain and reported far fewer work absences.

The recent findings also correspond to a survey of alternative health care treatments conducted by Consumer Reports, polling 45,601 of their subscribers. One in four respondents felt that they received better care from their chiropractors than from their medical doctors. More importantly, in this survey, chiropractic care outperformed all other treatments for both back pain (65% reporting that it “helped a lot”) and neck pain (64% similarly reporting that it “helped a lot”). In contrast, the respondents reported that prescription medications only helped 49% of the time.

It is gratifying to see that science is confirming what chiropractors and their patients have known for some time—that chiropractic spinal manipulation may be the most effective method for treating chronic neck pain. Whether your neck pain is acute or chronic, perhaps you should put your chiropractor at the top of the list of medical specialists to consult. Chiropractic care is safe, gentle, and—above all—it works.