Food as Medicine: Spotlight on Chocolate 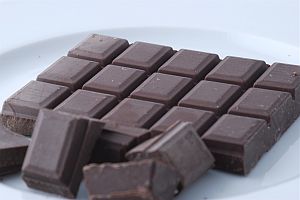 To many people who adore the dark, succulent treat known as chocolate, this news sounds too good to be true. But these are essentially the findings of a study that appears in the American Chemical Society’s Journal of Agricultural & Food Chemistry. Researchers from Virginia Tech University found that a particular antioxidant (flavonol) in cocoa prevented mice from gaining extra weight and lowered their blood sugar levels.

The researchers fed mice a number of high-fat and low-fat diets, including some high-fat diets supplemented with different types of flavonols. When they added one particular type of flavonol – oligomeric procyanidin (PC) – to diets that would normally have made the mice fat, these flavonols actually worked to keep their weight down. The flavonols also improved the mice’s glucose tolerance, a finding that could indicate that they might help to prevent type-2 diabetes. As the study states, “Oligomeric PCs appear to possess the greatest antiobesity and antidiabetic bioactivities of the flavonols in cocoa, particularly at the low doses employed for the present study.”

In an associated study, 90 elderly (human) participants who had been diagnosed with mild cognitive impairment drank either 990 milligram (mg) portions, 520 mg portions, or 45 mg portions of a dairy-based cocoa flavonol drink every day for eight weeks. Their diets were restricted to eliminate other sources of flavonols.

At the end of the eight weeks, the subjects were tested to measure their executive functions, working memory, verbal memory, and task-switching skills. Subjects who consumed larger quantities of the flavonol drinks had significantly higher scores than those who drank less. The study authors said about their findings, “This study provides encouraging evidence that consuming cocoa flavonols, as a part of a calorie-controlled and nutritionally-balanced diet, could improve cognitive function.” As an extra added benefit, the seniors who consumed more of the flavonol drinks had improved insulin resistance, blood pressure, and oxidative stress.

As it turns out, cocoa is one of the best natural sources of these flavonols. And it’s easy to find—just look for dark chocolate at your local grocery store. The researchers theorized that when the flavonols present in dark chocolate enter the stomach, a fermentation process there transforms them into powerful anti-inflammatory compounds.

However, before you run out and stock up on dark chocolate and start eating it non-stop in an attempt to lose weight and think more clearly, it should be noted that chocolate IS still fattening. Previous studies that indicated positive effects of dark chocolate on heart health recommended adding no more than a few grams – a piece the size of a Hershey’s Kiss – to your daily diet. However, Hershey’s Kisses themselves would not be a good choice, because the beneficial effects of chocolate were found in dark chocolate, not in milk chocolate. So although this research seems to indicate that you can add more dark chocolate to your diet without feeling guilty, you should do so sensibly.